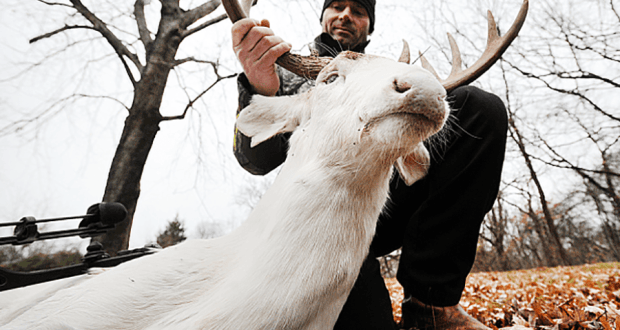 This 10 point albino buck was shot and killed in Missouri.

Albino deer are a rarity and many people love to see them and seek them out in states across the country. In my home state of Wisconsin, it is illegal to kill an albino deer, but many states allow it. This particular buck was from Missouri, where it is legal to kill an albino deer. The albino buck pictured above was famous among locals and many hunters passed on killing the deer, until this fall. Jerry Kinnaman took the Great White Buck this past November and it’s a true trophy.

“I gave him a fair shot. He had a good life,” Kinnaman told his local news. “He’s famous. He still will be.”

Check out the video below to hear more from Kinnaman on his story.

Kinnaman hunted the deer this year and knew that killing it may upset people, but it was a completely legal kill. He had a friend that allowed him to hunt on his property and had asked if he could shoot the buck if presented with a shot a few years ago. His friend told him not to kill it. In recent years though, there were trespassing problems on his property and his friend asked Kinnaman to kill the deer.

“It got so bad that he came back to me and said, `I want you to shoot this deer.”

This is a beautiful deer and a true trophy and I would not argue with anyone’s legal kill.

Earlier this year an 11 year old hunter from Michigan shot a nice 12 point albino buck with a crossbow.

Legal hunting is just what we said… Legal. There was nothing wrong with this kill and it’s much better than a poacher getting it.

See more of the latest outdoor news here on MorningMoss.

The post Best Halloween Candy for the Treestand appeared first on Bowhunting.com.

LINCOLN, Neb. – Hunters from around the country returned to rural Nebraska on Oct. 27-28 to partake in a coveted outdoor tradition – upland bird hunting during the 2018 season opener. Nebraska Game and Parks Commission staff contacted 1,040 hunters across the state while making bag checks. These hunters harvested 418 pheasants and 89 quail. […]

The post Hunters take to the field on pheasant opener appeared first on HuntingInsider. 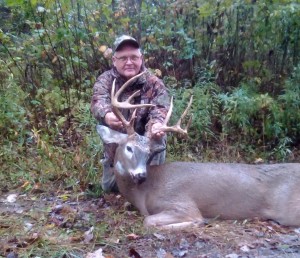 Big shout out to Big Daddy, who has stuck with me on the BIG DEER blog since I launched it 10 years ago:

Mike: Got this guy October 16 from my place in Potter County. This is my 40th archery buck in 40 years from Pennsylvania, which is a 1 buck per year state. Good hunting, Terry Murphy, a.k.a. Big Daddy.

Way to go Big Daddy, one heck of an accomplishment sir!

On this episode of the Nine Finger Chronicles hunting podcast dan catches up with returning guest Byron Horton about his recent run-n-gun success on Ohio public land. The guys discuss how Byron went about locating this particular piece of public ground, scouting it, and eventually hunting it.

He recalls running in to a ton of sign and that kept him from going in deeper than was the originally planned. Just when he thought he had it all figured out, the buck he was chasing came from the complete opposite direction and took him by surprise. With a couple quick adjustments he was able to complete one hell of a run-n-gun hunt.

If you are serious hunter, or like me and hunt from time to time, you probably have a few sets of deer racks laying around your garage. For me, I have one deer mounted, a 14-point buck I shot several years ago.

However, I have six other skull caps from other bucks over the years. Until recently, I never really had a desire to do anything with them. Well, until my wife decide that a European mount would look cool, that is.

Immediately, I started looking at ideas people did with other deer skulls. That’s when I stumbled on Mountain Mike’s and his European mounting kits.

I’ve seen these mounting kits before. Actually, I think it was when Gander Mountain was going out of business, they were all marked down and I almost bought one.

I always wanted to do something with the skull mounts that I had, just never really turned the corner on them and tried it. Without telling my wife, I decided I was going to get one of those mounting kits, cut the antlers off one of my actual skull caps, and do the dang thing and see what she thought. In hindsight, I probably should’ve just ordered a few antler mounting kits online. Lots of places offer free shipping, but I went to Cabela’s and fought the crowd anyways.

Coming in at $40, it could have been less expensive, but beggar’s can’t be choosers. I’ve never tried a mount kit before. I never did anything with DIY taxidermy either. However, cutting the antlers off a real deer skull and screwing them into a plastic deer skull didn’t seem that hard. Well, here’s what how it went down for me.

Right out of the package, the directions to the mounting kit warn about cutting the antlers at the right angles to make sure everything fits. I used a hand saw and went to town. I figured I could sand everything down and make it work in the end anyways.

Several times as I was cutting, I told myself that just doing the real European mount to begin with was probably the better way to go. I was in with both feet at that point, though. There was no turning back.

It’s important to cut the antlers just below the burr. It needs to be very flat, too. Deer antler is fairly easy to cut if you have a good blade so it shouldn’t take a whole lot of time. For me, it was about 10 minutes.

These antler-mounting kits come with everything you need to make your own Euro mount work pretty easily. Once both antlers are cleaned up a little, use a small drill bit and bore into the bottom of the antler at the angle you want them to display on the plastic deer skull.

It may help to actually hold it in place to see it before you drill. Mountain Mike’s allows for a little bit of wiggle room for the placement of the deer antlers so it doesn’t have to be exactly precise, thankfully.

Once the holes are drilled, use the provided screws from the skull mounting kit and just tighten them down. This part was pretty easy also. Once they are attached to the plastic European skull, they can be rotated a little to your desired look. This would work with mule deer just as easy as white tail deer, too.

There is a second skull attachment for smaller sizes deer antler mounting, which again, speaks to the flexibility.

The display of my new homemade European mount is where I struggled a little. I didn’t have an antler mounting plaque. Those are available to purchase as well, but I just stuck with what came with the skull master kit.

Once I found a stud, though, I was in business. I had it propped up and everything was great. Then I showed my wife. Immediately, my wife asked to paint it bright white. She felt the plastic look of the European deer skull made it look too fake, and I have to agree with her here. I never really intended for this project to be nothing but a garage display anyways, but she reaffirmed my feelings.

If a European skull mount is in your future, I’d recommend spending the money and getting the real thing. This Mountain Mike’s deer mounting kit is cool and functional. Unfortunately, they are just overly too fake looking to pull off with sincerity.

Would I buy another one? Yes. I plan to use a Mountain Mike’s mounting kit for each of my remaining deer skulls, and even a few shed antlers.

One of these plastic skull mounts would be hard pressed to be displayed anywhere other than my garage wall or the kid’s bedroom though. A real skull is a real skull and you can blatantly tell the difference.

The post Are Mountain Mike's European Mounting Kits Worth It? appeared first on Wide Open Spaces.

You know you need a crossing guard when…

A herd of elk can be a formidable bunch, and when they feel the need to cross pavement, who are we to try to stop them.

The following cell phone footage, which shows a large group of elk jay walking Highway U.S. 36 between Boulder and Lyons, Colorado, is an astonishing sight to be seen.

Feast your eyes on an elk jam at its finest:

WHOA! Check out all these elk crossing U.S. 36 between Boulder and Lyons. Big thanks to Kelly Schwalbert for the video!

Who else spotted the bulls in that bunch? Keeping the ladies close and looking out for them no doubt.

If you have to get stuck in a traffic jam, we can definitely think of less exciting ones to sit still idling for.

NEXT: COUNT THE CRITTERS CROSSING ‘THE LOG’ IN THIS TRAIL CAM COMPILATION

The post Video: A Herd of Elk Cause a Traffic Jam in Colorado appeared first on Wide Open Spaces.