New guns, tools, optics, and calls to help you drop even the smartest coyotes, bobcats, foxes and other furbearers dead in their tracks

Every January, the public gets a peek at the latest and greatest firearms, gear, and all sorts of hunting-related paraphernalia during the annual SHOT show event in Las… 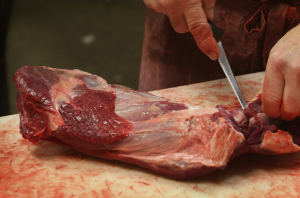 As if we needed more confusion about Chronic Wasting Disease (CWD) and its impacts on deer populations and the future of hunting, not to mention the gathering of venison to feed our families, a PhD and public-health scientist has thrown gasoline on the fire by stating, “I think the risk is very high” that CWD could be transmitted to humans that consume infected deer meat.

Mainstream media outlets, including U.S. News & World Reports, have picked up these recent statements and run with it, using terms like “death, dying and zombie  deer” that have stoked yet more confusion and fright about the disease.

The National Deer Alliance (NDA) responds in editorial from its president and CEO, Nick Pinizzotto:

The NDA reminds hunters…that there remains no scientific evidence that chronic wasting disease (CWD) is transmissible to humans….

“Recent statements by Dr. Michael Osterholm from the University of Minnesota regarding the likelihood that human cases of CWD are probable and possibly substantial in number are speculative and sensational, and are not supported by current scientific evidence,” said Nick Pinizzotto, president and CEO of NDA.“Mr. Osterholm’s predictions have created needless confusion in a situation that is already rife with contradictory opinions regarding CWD impacts on the conservation of wild deer and those who enjoy deer as a natural source of protein….”

…it is important that words are chosen wisely, and that the focus is on what is known about the disease, as opposed to speculating on what is not known. Actions taken in response to CWD must be based on the best available science. After more than 50 years of history with CWD, undoubtedly thousands, if not tens of thousands, of infected animals have been eaten, yet there remains no human case of the disease.

The NDA points out that The Centers for Disease Control and Prevention (CDC) continues to state there is no strong evidence for the occurrence of CWD transmission in humans.

But, and this is what you as a deer hunter need to remember right now, the CDC still recommends that humans not eat deer that test positive for the disease out of an abundance of caution. If you hunt in or near an area where CDW has been detected in deer, you must have the meat tested before eating it.

The NDA agrees with the guidance from CDC but reiterates that the agency does not state transmission to humans is either likely or inevitable.

“The last thing we need to do is scare people away from consuming deer meat…,” said Pinizzotto. “Further research is needed to answer the many important questions we have about CWD and how to manage it, but until science tells us more, we have to move forward armed with the best information available, and nothing more.”

The Ruger American Ranch rifle is billed as a lightweight, rugged and inexpensive rifle for hunting and general shooting.

As you’ll see in a minute, this bolt-action rifle seems to live up to that promise in the hands of a young hunter when he takes a nice 9-point buck with one in Oklahoma.

He had a Nikon ProStaff scope on his rifle and was using Hornady 123-grain SST bullets, both of which are great choices for the type of hunting he was doing.

Watch the video below to see how his hunt went.

That just goes to show what a well-placed shot from a 7.62x39mm cartridge will do to a whitetail deer.

There’s not a darn thing wrong with hunting with a really fancy or expensive rifle, but this is just another example of how effective a budget hunting rifle can be.

NEXT: CHECK OUT THIS SOUTH DAKOTA MULE DEER HUNT WITH A 6.5 CREEDMOOR

The post Check Out This Oklahoma Deer Hunt With a Ruger American Ranch Rifle appeared first on Wide Open Spaces.

Portland, OR February 26, 2019 – OTTO DesignWorks, makers of the OTTOLOCK® Cinch Lock, announces the release of the new HEXBAND™ series, featuring added resistance to shearing tools such as snips and cable cutters. Getting through OTTOLOCK HEXBAND requires serious effort or powered devices, making it a stronger quick-stop lock for bicyclists and other users with higher […]

Although 2017 set a new record for the most deer killed in Massachusetts, that number was eclipsed in 2018, a season that now claims the new title.

The Division of Fisheries and Wildlife recently announced that a total of 14,513 deer were killed during the 2018 season, breaking the record high from the previous year of 13,220.

“Deer density and hunter effort tend to be the most important factors influencing harvest from year to year,” the Division of Fisheries and Wildlife wrote. “However, there were two important changes for the 2018 season that may have led to the record harvest. The opening of over 7,500 acres of Wachusett Reservoir Public Land and the two-week extension to the archery season.”

Over 700 deer were taken during the two-week archery season extension in zones 10 through 14.

As for which of the 15 hunting zones had the highest deer harvest, it was the zone that covers the states southeastern area.

By the Youth Spring Turkey season of 2018, I’d been a parent for 6 1/2 years but a turkey hunter for 25. So while I was proud of the boy for enduring the 25-degree North Florida weather and hiking through a muddy creek bottom to reach my blind, I was visibly disappointed when he coughed after a longbeard gobbled 75 yards away. Harrison picked up on my angst and apologized. I figured the kid’s phlegm had killed the hunt. We… Read More »