For hunters and anglers in the U.S., there is a lot at stake right now. And if we don’t fast, we risk losing an American legacy

Are we willing to pick up the fight for our public lands? 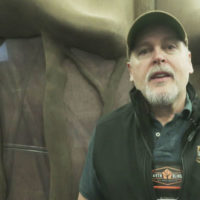 Youtuber Tim Harrell gets some very interesting video of the local wildlife from his trail camera on a small waterhole in the Florida Everglades.

We’re in for a treat this week, as a reader shares his century-old rifle used in World War I

We’re in for a treat this week, as a reader shares his century-old rifle used in World War I.

Hornady Black ammo is designed to function reliably and shoot accurately in a wide range of modern sporting rifles for a broad spectrum of applications including hunting, plinking, and self-defense.

As modern sporting rifles have become more and more popular among hunters and shooters in the United States, the big ammunition companies have recognized the need for a special line of ammo optimized for performance in those guns.

With this in mind, Hornady Manufacturing rolled out their line of Hornady Black ammunition in 2016.

Unfortunately, modern sporting rifles can be very finicky with the ammo they will reliably function with. A particular type of rifle ammunition may shoot beautifully in a rifle with a certain barrel length, but may not work at all in a different rifle.

Just like the name states, Hornady Black ammo is intended for use in so-called “black guns” like the AR-15/AR-10 family of firearms. Hornady’s goal was to build a line of ammo that will reliably function in a wide variety of platforms regardless of whether they’re direct impingement, inertia, bolt-action, pump, or gas piston operated. The same goes for suppressed and unsuppressed firearms across the whole range of barrel lengths.

Basically, Hornady was trying to build a line of ammo that offer superior performance in just about any gun, and like the Hornady American Whitetail line, was also easily identifiable by hunters and shooters as fitting their needs.

Hornady Black ammo utilizes a number of versatile loads with different bullet options depending on the cartridge. The 5.45x39mm, 6.8 SPC, and .300 Blackout loads all feature the V-Max bullet. The .223 Remington and 5.56 NATO loads are both available with a full metal jacket (FMJ) bullet. One .223 Remington load also features a 75 grain boat tail hollow point (BTHP) match bullet while there’s also a 5.56 NATO 75 grain grain InterLock load.

The .224 Valkyrie and 6mm Creedmoor both use standard BTHP bullets and the 6.5 Grendel uses an ELD Match bullet. The .300 Blackout and .308 Winchester are also both available with A-Max bullets. The 7.62x39mm load uses a 123 grain SST bullet and the .450 Bushmaster load fires a 250 grain FTX bullet.

Note: there are currently no non-toxic options for Hornady Black ammo. If you need something lead free, consider the Nosler E-Tip or Barnes VOR-TX.

That being said, those different Hornady loads offer excellent performance for a variety of applications ranging from plinking and competition shooting (A-Max, BTHP match, ELD Match, and FMJ), to predator and varmint hunting (V-Max), to self-defense and big game hunting (FTX, Interlock, and SST) with America’s favorite guns.

So, regardless of whether you’re looking for some dependable ammo to use in your modern sporting rifle for general plinking, serious competition shooting, self-defense, or hunting, check out the Hornady Black line of ammo.

NEXT: EVERYTHING YOU WANTED TO KNOW ABOUT HORNADY PRECISION HUNTER AMMO

The post Here's What You Need to Know About Hornady Black Ammo appeared first on Wide Open Spaces.

It was the dream of pioneer, archery lover, writer, business owner Dave Staples and now the Archery Hall of Fame is the shining example of prestige and honor for those who give so much to the sport of archery. You can support and help this vision grown even more.

For more please go to: The Archery Hall of Fame

The extensive use of the Smartphone has resulted in big improvements for portable power. Two things needed improvement: (1) the charge didn’t last long and (2) they were fragle. But the new tech brought some significant changes: (1) much longer battery life and more power, plus (2) they have gone from flimsy to rugged. So just how rugged?

Well, Living Survival got out his hammer and shotgun, threw it in the river and dropped it from high places. And, impressive doesn’t even cover it!