On this epoiusode of the Nine Finger Chronicles, Dan talks with new bowhunter Adam Pastrnak of western PA about his introduction in to hunting and his transition to bowhunting. Adam explains how he started hunting with his brothers and admittedly didn’t know what the hell they were doing. Then, three years he was introduced to bowhunting throught his brother in law. And, as it happens often, Adam is now addicted.

Adam explain how his first couple sesons were a bit of a struggle. But through learning from failure Adam eventually connected on a beautiful 8 point buck.

Deer hunters are a strange and obsessive breed that never stop thinking about chasing whitetail deer.

Honestly, some of the content found herein may be more widespread than we want to admit. It’s even possible that this should be named “5 Things That All Deer Hunters Do In the Summer,” but we’re likely not that obsessed are we?

Successful hunters never take a day off, and deer hunters are the optimum breed. Deer hunting is our life and passion and every whitetail hunter that chases a rack of antlers during deer season knows one thing: when the moment of truth arrives no one is more prepared to cut down the deer population than the venerable deer hunter.

Whether it’s archery season or the rage of the rut that drives you, big game hunting for whitetails is the reason why we spend so much time in the woods and keep our credit cards smoldering during the entire year. The trail camera may be getting mostly antlerless deer pictures right now, but better deer are out there and that’s the prime reason why we obsess over deer hunting. It’s also why we do some of the strange things we do.

Once you’ve gotten that first game camera picture of a growing big buck you’ll be dreaming about the wind direction and a double lung shot, but not to worry because you’ve been doing your homework right?

Here are a few of the OCDH (Obsessive Compulsive Deer Hunter) things we do to keep our minds off of the fact that it’s still 90-plus degrees outside.

1. Blow and/or Stomp at a Deer

To say that you haven’t done this one at almost any time of the year is a big fat fib for a deer hunter.

We see them everywhere (including in our dreams), so it stands to reason that during the offseason we want to know what all their reactions are, and this is the best time of the year to do it. Raise your hand if you’ve ever garnered a “What the hell are you doing?” response from your significant other.

Or a fox, fawn, rabbit, coyote, or whatever. While we’re getting some good pictures of antler growth and body size, mature bucks are still in summer mode and their necks aren’t swollen yet. Game cameras can be a pain to check, what with the bugs and all, but it’s almost time for some good bragging photos while we’re still getting chased out of the woods.

3. Take Our Calls On the Road

Included here are a few of my favorite duck calls–including a drake mallard–a rooster pheasant call (which I sometimes use as a turkey locator call), my slate call, and my beat up, go-to grunt tube. I’ve been leaving this lot in every truck I’ve owned for the last 25-years to insure that I keep blowing them all year long.

Somewhere in western NY you could probably find someone who has sat next to me at a stop light and wondered how I escaped from the asylum. Since people continue to light a smoke, do their lipstick, and a plethora of other one-handed things, I don’t think blowing a grunt tube in the car is a big deal, but if you feel that its inherently dangerous, then by all means do not do it.

4. Put the Scope On Something. Anything!

Muzzleloaders, crossbows, shotguns, and rifles all can have them, and since most do, we have cause to raise it up, aim at a tree in the backyard and pretend to pull the trigger. If you get deer in your yard or see them out on your property, then even better, as it gives you a virtual target to practice on. Squirrels are great for this along with rabbits, skunks, possums, etc, but don’t pull the trigger on anything that’s not in season!

My deer hunting clothes are in a constant state of hanging from the rafters of the garage to insure that they get all of the air that they can. Still, months after the season is over I love the way that they still smell like deer dander, the tree that I use, and the outdoors.

And yes, there is still a hint of doe-in-estrous smell on there that only makes it all the better. Even though it may seem a bit odd, it is still the best reminder of the open season that I can get with months to go until the autumn.

As a breed of hunter, the deer hunter is one of the most unique and maybe the hardest working. We talk about it, think about it, and spend the night dreaming about it until it all comes to fruition.

Just because we blow a grunt tube at a stop light or take random whiffs of our clothes as we walk by doesn’t make us bad people, it just makes us more lovable and most importantly: more successful.

NEXT: 10 THINGS THAT HAPPEN WHEN YOU’RE MARRIED TO A DEDICATED HUNTER

The post 5 Strange Things Deer Hunters Do in the Summer appeared first on Wide Open Spaces.

Just in case you were wondering what a .50 cal does to a boat, these guys found out, and it’s everything that you hoped for.

The fun-loving guys at Lunkers TV have decided to make our day by filming a little excursion they took to a private pond in the Lone Star State, and it involves plinking with some suppressed, semi-auto nine-mil ammo, pulling a Chevy out of the mud with a FORD, and yes, sinking a boat named “Ricky” with an open-sited .50 cal!

First off though, watch with glee as their sponsor World of Tanks, Mercenaries takes them on a small mission to blow things up and generally make us all smile. And if you enjoy a tank crushing some old scrap cars, then more’s the fun!

Just so you know, Ricky isn’t all that ready to die, so don’t be surprised when it takes all that these guys have to do the job. How many rounds do you think it will take to send Ricky to his ultimate watery grave?

So the big surprise ending was that Ricky just couldn’t be sunk. I guess the lesson learned is that styrofoam and aluminum are more powerful than nine-mil rounds and a .50 cal. That doesn’t sound right, does it?

Maybe they should have run over it with one of the tanks!

Anytime that we can watch the .50 cal in action is good time spent, for our money. Having a good quality scope on that thing would be the best case scenario, but there’s a good bucket list item for those with experience: blowing a boat out of the water with an open-sighted 50!

NEXT: .50 CAL VS. PROPANE TANKS: EXACTLY WHAT YOU NEEDED TODAY

The post This is What Happens When You Take a .50 Cal to a Boat appeared first on Wide Open Spaces.

Though it’s not an extremely popular elk cartridge, there’s not a darn reason why you can’t go elk hunting with the 280 AI. Here’s why.

Also known as the .280 Ackley Improved or the .280 Remington Ackley Improved, the .280 AI is basically a .280 Remington case (itself a .30-06 Springfield case necked down to 7mm/.284″) that’s been blown out to increase the powder capacity. As you’ll see, it makes a great elk hunting cartridge that’s more powerful than the 6.5 Creedmoor and nearly as hard hitting as the 7mm Remington Magnum.

These particular hunters were using a .280 AI loaded with 168 grain Berger bullets on a recent elk hunt. They managed to find a dandy of a 6×6 bull elk who seemed to be more interested in finding a receptive cow than anything else.

Unfortunately for the elk, it stood still for just a little too long and presented a quartering shot for these hunters at a range of about 325 yards.

Watch the video to see how the .280 Ackley Improved performed.

As you can see, it’s not necessary to use a .338 Lapua for elk hunting. Good shot placement and good bullets with a wide variety of cartridges will do the job on elk, and that’s exactly what happened here.

In this particular case, his shot hit a little high and impacted right on the spine, thus dropping the elk in his tracks. Now you can see that sort of “magical” performance from virtually any big centerfire rifle cartridge that hits an animal in the central nervous system. So, while the results were indeed impressive, let’s not overstate the capabilities of the .280 Ackley Improved Cartridge here.

It’s still a darn capable cartridge that’s up to the task of quickly and ethically taking down a big bull elk though.

The .280 Ackley Improved was standardized by Nosler with SAAMI rather recently, but it’s already gaining a reputation as a sought-after, flat-shooting and hard hitting cartridge almost on par with the 7mm Remington Magnum, but without quite as much recoil. So, if you consider the 7mm Remington Magnum to be appropriate for a particular hunting situation, then the .280 Ackley Improved will probably fit the bill as well.

NEXT: HUNTER SHOOTS ELK FROM 875 YARDS WITH A 308 WINCHESTER

The post What Do You Think About Elk Hunting With the 280 AI? appeared first on Wide Open Spaces.

(MANSFIELD, TEXAS) – Firefield is set and ready to roll at this year’s Texas Trophy Hunters Association Extravaganza (TTHA.) TTHA Extravaganza will be held at the Fort Worth Convention Center in Fort Worth, TX on August 9–11, 2019. The family-friendly event will host various vendors, numerous hunting and shooting clinics, giveaways and industry celebrities. Firefield will […]

The post Firefield is Set for TTHA Extravaganza 2019 appeared first on HuntingInsider.

How much seed do I plant for food plots? It’s an overlooked question that needs answered. Here’s what you need to consider before you start…. Read more…

The post How Much Seed Do I Plant for Food Plots? appeared first on Bowhunting.com.

Turning small pieces of ground into great hunting is overlooked by many, but they’re missing out! Smaller parcels of hunting land are great options for almost anyone, and you can get down to managing the square footage of the property. By managing on a smaller scale we can focus on making every square inch a beneficial product for the wildlife and the land. Whether you own 1000 acres or 15 acres there is always something to do to improve the habitat and ultimately make your hunting better.

Join us for a new series of podcast where we discuss habitat management, conservation, and hunting strategies with landowners across the country! Are you considering a property consultation, but having a hard time justifying the cost? Maybe this format is for you! During this podcast we chat with Steve Schlenker from North Carolina. He lives and hunts on 20 acres in the fragmented landscape of central North Carolina. We’re working to turn his property from a pass through property to the best 20 acres in the neighborhood! How to turn a small track of land into a hunting paradise?

Prioritizing your management goals and projects is the fastest way to reach his goals. We discuss timber management, bedding area creation, hinge cutting, bottlenecks for deer, food plots, hunting access, and so much more. 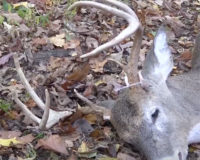 You can substantially kick up your shot opportunities with mock scrapes. Here’s what to do.