Often times there are various grey areas hunters find themselves in. Hunting is a unique combination of strict legal hunting regulations and a code of ethics to help guide decisions. Despite these boundaries to provide hunters a moral compass, there are still situations that arise where people seem to have a flexible code they follow.

In this podcast, we discuss various highly debated discussions that hunters may find themselves in. Often times these situations are focused around public land where hunters from all walks of life with varying skills and hunting styles collide and share the land. We ask questions like, 1) If you’re hunting public land and you find an unattended treestand, is it okay to hunt from it? 2) It is okay to share trail camera pictures of a hit list buck from your buddies camera?

Be sure to let us know what you would do in each situation. Post your thoughts on these situations on our corresponding social media posts. We encourage you prior to the season to play by the "Golden Rule" this hunting season. Be fair, be safe, be respectful, and enjoy the outdoors. Enjoy.Learn.Share! #ForLoveoftheLand 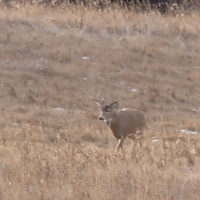 Alberta is an incredible destination for mule deer and whitetails, as well as coyotes and a few other attractions in the foothills of the Rockies.

Deer hunting returns to the bulk of the state on September 14th with Archery and Crossbow seasons in Zone C. South Florida hunters have been sticking nice bucks already. Check out Lower Florida Bucks on Instagram if you require validation of that statement. By the off-chance this news missed you, please be aware of the changes to Florida deer hunting this season. An annual bag limit of five deer was established. This is the total number of deer one can… Read More »

A sea turtle was found with a plastic straw in its nostril. See the extraction.

Researchers near the coast of Costa Rica came across a sea turtle in distress.

Originally thinking a tube worm was stuck inside its nostril, the team took to the task of taking it out. They soon realized it was, in fact, a four-inch long plastic straw stuck in the turtle’s nasal cavity.

The procedure looks painful but relief definitely can be felt at the end.

Those small pliers luckily did the job. Makes you think twice about the effects of littering, and especially about single use plastic.

Luckily for this turtle, it is able to breathe freely again.

But if you aren’t considering how plastic bags, plastic drinking straws, or any other plastic items are affecting marine life, you’re a small piece of the bigger problem. It takes a viral video of a fishing hook stuck in a dolphin’s flipper to get people concerned.

Or, a plastic straw pulled from an olive Ridley sea turtle’s nose.

Can’t we spread the dangers of plastic waste through social media, instead of all those dumb cat videos? It shouldn’t take a research team of marine biologists to figure that out.

A ladder stand seems rather welcoming to this black bear.

A deer hunter in Otter Tail County, Minnesota got a little more than he bargained for.

When he sat in his ladder stand, waiting for a whitetail deer, something odd happened.

Watch the clip to see what he saw.

The black bear would have assumed a ladder was far easier than gripping a tree trunk and scrambling up, or was just curiously smelling an unfamiliar sight.

Either way, a bear tag would have been a nice thing to have in your pocket if you were this hunter!

When a bear climbs that high up a tree stand, you better hope you aren’t strictly a bowhunter! Bear hunting with archery is not for the unprepared. As far as big game in North America goes, it’s a bear attack you’re probably worrying about the most. What would he have done if it were a ground blind?!

NEXT: What Happens When This Grizzly Bear Tests an Electrical Experiment?

The post Bear Thinks This Deer Hunter's Ladder Stand Was Made for Him appeared first on Wide Open Spaces.

Injured Buck – Will he survive?

You can see the loose skin between the buck’s back legs. Disease expert, Bill Samuel, feels that this could be a hernia or deep tissue injury, but it appears to be healed. Likely, the buck will survive.

Drake filmed this buck back in early September in the exact same place where I filmed him the year before – a spot our daughter named “Bucky Ridge” after she shot a nice buck there in 2007.  You can see the video of this deer by clicking my Video Blog from that evening.

Interestingly, the buck has grown quite a bit since last year, but also he has now developed some kind of condition related to his abdomen. If you watch the video you can see it more clearly, but even in the attached photo you can see a lot of loose skin hanging down between his back legs.

I would say he is 4 years old this year, but could be as young as 3. I would be guessing.  My concern is that another high genetic buck on the farm might die of natural causes – that seems to be happening a lot here recently.

This is the same buck in the same field last year. He looks to have to grown quite a bit from last year to this year. I am going to guess he was 3 last year, but it is possible that he was only 2. Hard to say.

I sent the photo to a friend of mine, Dr. Dave Samuel.  Dave is a top expert on whitetails and has authored many articles and books that are among the best you will read.  If you  have not read a Dave Samuel book, you owe it to yourself to Google his name and find one.

Anyway, Dave graciously forwarded the photo to his brother Bill, who is an expert in whitetail diseases.  Here is Bill’s reply:

Brother Dave sent to me for comment.Working on WTD parasites and diseases for many years, but never saw anything like this.  Wonder if it might not be a hernia.  Just a guess.

Another thought is an injury from stick or barbed wire that tore deeply into tissue.  Could be healed.  Could be infected, but if so, looks OK at the surface. All guesses.

I will be watching the buck closely after I get my trail cameras out; if he starts looking like he is going downhill (he looks healthy enough now), I will make the decision whether to hunt him.

Nature is hard on these animals. There is always something out there trying to kill them, even if it is just a stick or a fence!  When they make it to full maturity we need to celebrate each and every one of them, regardless of what they have on their heads.

The post Injured Buck – Will he Survive? appeared first on Midwest Whitetail.

Joe Kondelis, founder of The Western Bear Foundation sits down with Chris and Steve for an in-depth look at a foundation that is effectively working to protect the black bear resource and the ethical hunting of black bears across the United States.

This trio goes deep into the current management of bears and what hunters from every region can do to maintain a healthy black bear population and the houndsman’s opportunity to manage them within the scope of the most effective wildlife management tool, hunting.

The Western Bear Foundation has found the right recipe to effectively work in concert with game managers in the west. Joe shares his ideas about how eastern bear hunters can elevate their credibility and expand their influence with state game agencies and within the hunting community.

This episode truly is one to unite Houndsmen across the country against the forces that work tirelessly to take away our heritage and rights to hunt.