August 2019 (Miami, FL) – Taurus®, a leading innovator in handgun technology for personal defense, hunting, and competition, is excited to announce the release of their first full-size G-series pistol. The new G3 9mm semi-auto represents the next generation in the Taurus G-series polymer-frame handguns. For the last several years, the Taurus G2c pistols have […]

The Signature/Competition Series Grows Bigger with the Innovative, Lifelike and Durable New Midwest Buck 3D Target Janesville, WI — Rinehart Targets® is well known as the leader in 3D archery targets for the competitive shooter and the hunter looking to hone his/her skills. This season, they dug deep into the Heartland to bring a true […]

The post GET YOUR SHOT AT A BRUISER MIDWEST BUCK FROM RINEHART TARGETS® appeared first on HuntingInsider.

Steinel Ammunition is betting on the enigmatic round with four variants, all premium performers without the big-ticket price tag. Twinsburg, Ohio (August 2019) – Steinel Ammunition, having distinguished themselves as the champions of forgotten military rounds and persuasive big bore calibers, put their confidence in a handgun round that although had a brief period of stardom some […]

The post Is the 10mm Round a Trend or Here to Stay? appeared first on HuntingInsider.

Think about the number of hours that go into the preparation of a whitetail hunt. Researching sections, buying tags, preparing food plots, scouting for rubs, tending game cameras… It’s a year-round job.

But all this work is offset by the enjoyment of the fresh, organic venison that fills the freezer and keeps the family fed. Not to mention the memories with family and the stories that will be told for decades after the hunt.

It’s the pre-hunt preparation and post-hunt enjoyment. Every hunt is built from these two separate, and quite distinct, periods.

But what links these two sides of the same coin? What denotes that split second when one phase passes into another? What is that “ballistic bridge?” It’s the bullet and the carefully tuned powder recipe behind it.

Once that trigger is pressed and the shot breaks, all the pre-hunt preparation is over. It’s out of the hunter’s hands, and success or failure is determined by how well-prepared and planned the hunt was ahead of time. The most successful hunters don’t leave this moment to chance–they choose a premium hunting bullet from a cartridge company that understands accuracy and reliability and the importance of those in hunting.

For this whitetail hunter, that choice is Ballistic Tip ammunition from Nosler.

Known around the world for their superior reliability and consistency, Nosler matches each caliber and bullet weight with a precise charge of high-performance powder. This attention to detail ensures the highest level of velocity and pinpoint accuracy, both of which contribute to a successful hunt.

But if we drill down to the core of what the ballistic bridge is made of, we need to focus on the bullet itself. This is the one choice we make as hunters that has a direct, physical impact on our prey (literally as well as figuratively). The best rifle, optics, camouflage and calls are meaningless with a bullet that fails to perform. Almost three decades of research and refinement have gone into earning Nosler’s Ballistic Tip the reputation as America’s #1 deer bullet, so it was a no-brainer to load the legend into its own line of ammunition. The pioneer of polymer-tipped ammunition, Nosler’s color-coded tips serve several key functions. They streamline the bullet, improving ballistic coefficients, and also protect the tip from accuracy-robbing deformation in the magazine. Lastly, but possibly most importantly, they start the expansion of the Ballistic Tip bullet upon impact, unfolding the projectile’s tapered jacket design into a beautifully mushroomed bullet with high weight retention.

All of this allows the bullet to transfer almost 100 percent of its energy into the target. This energy, which we call terminal ballistics, is the result of a high-velocity journey that physically began at the muzzle of your rifle, but was several months in the making.

In a way, it’s an act of faith. You have to believe that the little lead and copper pill you’ve sent on a 2,000+ feet-per-second journey will arrive on time, on target, and then perform as advertised. I simply don’t trust the “on-sale” ammo with the rebate attached with all the hours of work I’ve put in.

I’ve worked my tail off to put myself into the position to harvest a whitetail, and I don’t want it all to be wasted. That’s why I trust Nosler Ballistic Tip ammunition to quickly and effectively put meat in my freezer.

Another really fortunate hunter will win a Winchester XPR rifle and an SXP shotgun as the September monthly prize during the DOD 30th Anniversary giveaway.

With summer nearly in the rear-view mirror, deer season is fast approaching and another lucky hunter will win a cool prize from Drury Outdoors as part of the DOD 30th Anniversary Giveaway this month. Winchester Repeating Arms is providing the September prize pack with a bolt-action XPR centerfire rifle, an SXP Turkey shotgun, and $350 in Winchester gear store credit.

First unveiled a couple years ago, the Winchester XPR is a good choice for a hunter who wants a no frills, but very capable rifle that offers solid performance afield. Currently manufactured in .243 Winchester, 7mm-08 Remington, .308 Winchester, .270 WSM, .300 WSM, .325 WSM, .270 Winchester, .30-06 Springfield, 7mm Remington Magnum, .300 Winchester Magnum, .338 Winchester Magnum, 6.5 Creedmoor, and the brand new .350 Legend cartridge, the XPR is well suited for deer hunters as well as those after bigger quarry like elk and moose.

The SXP is Winchester’s flagship pump-action shotgun, and is currently available in a number of different configurations for hunting everything from waterfowl, to deer, to turkey.

Specifically, Winchester is giving away a 3″ 20 gauge SXP Turkey model and an XPR rifle chambered in 6.5 Creedmoor this month. So, that lucky person will get a nice big game rifle, a great turkey shotgun, and an additional $350 in Winchester gear store credit. All told, this month’s prize is worth over $1,200.

In addition to Winchester Repeating Arms, several other major brands in the outdoor industry have partnered with Drury Outdoors to give away monthly prizes valued at over $33,000 during the course of 2019. So far, seven hunters have already won some really cool hunting gear.

Butch Houston won a full set of Scent Crusher gear in January, Cole McCreary received two pallets of Ani-Logics supplements and minerals in February, Kenneth Baker will get the chance to do some serious food plot planting with the massive pack of BioLogic Seeds he won back in March, Michael Kleidon hit the jackpot with the RTP Ground-Breaker 3 in April, John Grohs received a Morrell Target lineup in May, Eric Spacek (pictured below) will have the opportunity to hunt in his new LaCrosse boots that he won in June, and Joshua Slatton will be hunting in style from his new Muddy Penthouse box blind this fall.

Once they conduct the drawing for the month of August, another lucky hunter will win an autographed PSE Custom Stealth Carbon Air bow.

Be on the lookout for the remaining monthly prize announcements throughout the rest of the year. You can also sign up to win the grand prize of a 60-acre farm in northern Missouri (complete with pre-scouted stand locations and food plots) through the DeerCast or via their web site at DruryOutdoors.com/farm.

You can access DeerCast at DeerCast.com or download the DeerCast mobile app through the Apple App Store or Android’s Google Play.

By the way, Drury Outdoors has made some BIG updates to DeerCast this year. So, even if you don’t win one of the many prizes they’re giving away, it’s still a great tool you can use to hopefully bag the buck of your dreams this fall.

The Drurys make all their monthly winner announcements through DeerCast. Mark and Terry Drury will announce the name of the lucky individual who wins the grand prize at the 2020 Archery Trade Association Show.

Now there are even more options in what many claim is the strongest personal-defense round, Hornady’s Critical Defense.

You can’t have too much of a good thing, huh? That’s a saying that doesn’t really apply when you’re talking about self-defense.

The training you acquire, the gun you choose, and the ammo you shoot through it should weigh heavily on anyone’s mind if they care about protecting themselves and their loved ones.

We’ve known about the merits of Hornady Critical Defense ammunition for quite some time, but were surprised to learn how far they’ve gone beyond the typical handgun and shotgun calibers we’re used to in the self-defense market.

The proven hollow-tip bullet sees maximum potential with Hornady’s FTX, a patented, expansion-aiding Flex Tip that won’t clog when it passes through clothing or other similar materials. Critical Defense also has a notable difference in flash propellants, meaning a shot in darkness won’t disrupt night vision.

Their nickel-plated cases resist corrosion, and the dependability speaks for itself.

And, as gun owners have diversified their interests and preferences in self-defense firearms, Hornady has followed suit by offering more selections using the same ballistic technology.

There are now rifle rounds, reduced recoil cartridges, and a .410 Triple Defense shell that has an FTX slug and two round .35-caliber balls. Each represents the pinnacle of threat-stopping power, Hornady says.

Reduced recoil, or “Lite” rounds can be found in .38 Special and 9mm, and the .410 is a 2 1/2-inch shell. As a bonus, a portion of the proceeds from the Lite rounds will go towards breast cancer research, an extra-noble cause worthy of some recognition. Both .25 Auto and .30 Auto handgun rounds can be had in the Critical Defense collection now, too. The bottom line is, when the choices you make create a difference in life or death, safety or danger, you shouldn’t have any doubt you’ve made the right decision.

If you’re using something other than Hornady Critical Defense, you owe it to yourself to personally evaluate the difference. And now there are even more ways to do it. 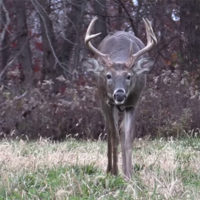 The DDH crew dives deep into the unpredictable travel patterns during the whitetail rut and gives advice on how to increase your chances of success.

Anyone who is a fan of surfing knows the name of Shane Dorian.  He is currently one of the best big wave surfers in the world.  He is also a hunter.  Shane Dorian worked with the team at Time Concepts to create the ICON Shane Dorian Signature line of watches.  We got the opportunity to […]

It’s great to finally have a pair of Bluetooth earbuds that are designed to handle everything we can throw at them outdoors.  These earbuds come with a portable 32-hour rechargeable power stick, and they are weatherproof and sweat proof.  The quality of sound is good with enough bass for music.  They sound great on phone […]

Little Rock, Ark. – August 28, 2019 –Quail Forever is pleased to announce the hiring of Adam Cooper, a passionate hunter and existing chapter volunteer, as the organization’s Regional Representative in Arkansas, Louisiana and southern Missouri. In this role, Cooper will provide support across a growing region for Quail Forever affiliate volunteers – currently home to […]