Including two World Duck Calling Championship qualifying contests Groves, TX – (February 20, 2020)  – Sure-Shot Game Calls is proud to be the Presenting Sponsor of Marsh Fest among many other sponsors such as Mossy Oak, Ducks Unlimited, Remington, Filson, Delta Waterfowl, Koplin, and MOJO as well as several local businesses in the Southeast Texas area. Join us …

The post Sure-Shot Game Calls is the Presenting Sponsor of Marsh Fest appeared first on Hunting and Conservation News.

Meet Samson, our freakishly huge duck. I’m not sure if he’s a record-setter or not, but he is gigantic. Also, here’s a quick farm update.

Do you want to buy Gold Shaw Farm t-shirts and other merchandise? Go here: http://bit.ly/2tGBh97

About Gold Shaw Farm: Gold Shaw Farm is more of a farm-in-progress than an honest-to-goodness farm. Our dream is that someday we are able to transform our 150+ acre parcel of land into a regenerative and productive homestead and farm.
Video Rating: / 5

In the span of the 50 years since Pete Shepley began Precision Shooting Equipment, Shepley’s company PSE Archery has been responsible for more breakthrough innovations in modern compound bows and archery equipment than any other single manufacturer in the archery and bowhunting industries. 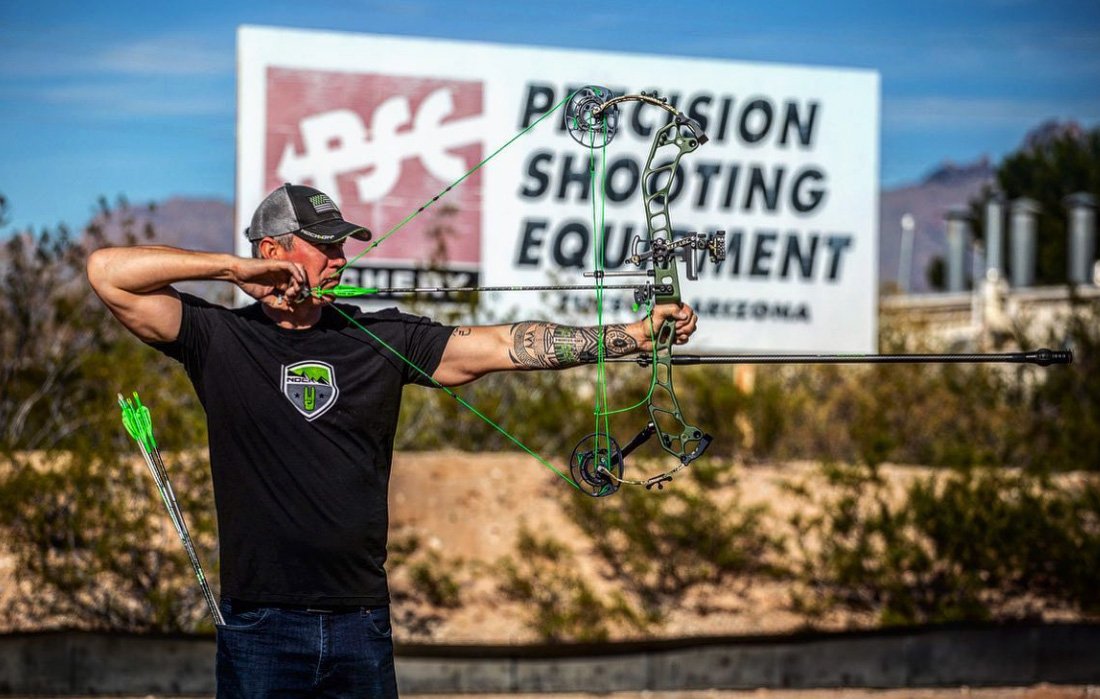 For 2020, PSE Archery has joined with bowhunter and archer John Dudley of Nock On Archery. John is widely known for his social media following, the #NockOnNation, his podcast, and online videos about archery technique, shooting instruction, bow tuning, and gear selection and setup.

At the ATA Archery Trade Show in January, PSE announced Dudley’s custom design innovations on the new 2020 NOCK ON® EVO® NTN 33. This latest PSE bow is custom-designed by John Dudley in conjunction with PSE’s R&D and manufacturing facility. 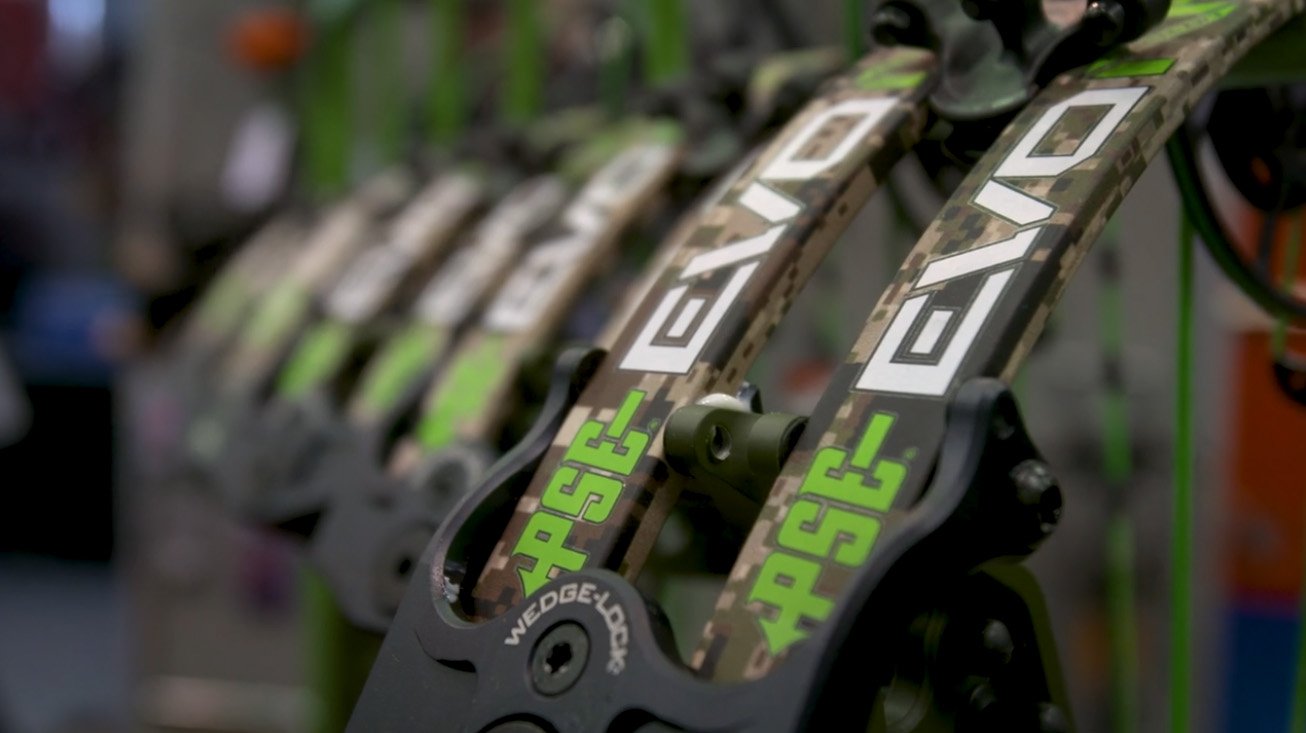 The side of the bow’s riser is now custom slotted for a zero-tolerance fit of the Precise-Lock Cable Guard System.

The EVO NTN also includes an integrated riser ready Quickstand System that allows bowhunters to prop the bow up in a shoot ready position when ground blind hunting as well as when practicing on the range. The integrated Quickstand System is designed to be shot on the bow. It removes easily removable and can be stored in a bow quiver or back quiver with your arrows. 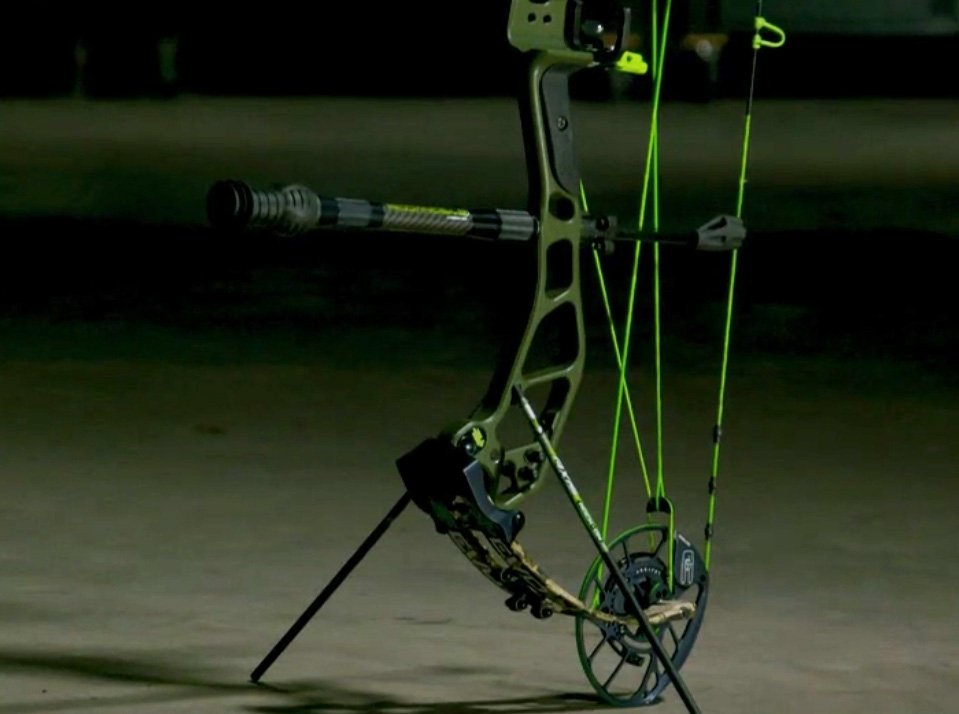 The limbs ON the EVO NTN are finished in GORE® OPTIFADE® Subalpine camouflage by SITKA®, the first-ever offering for PSE. The limbs pair perfectly with the new matte timber green riser and everything is brought together with Nock On green custom strings and cables.

System gives you the choice of the proven, PSE-engineered riser grip technology that minimizes hand contact to the riser, therefore, reducing hand-induced torque, or the new molded grip overlay option for a larger grip surface area and warmer feel. 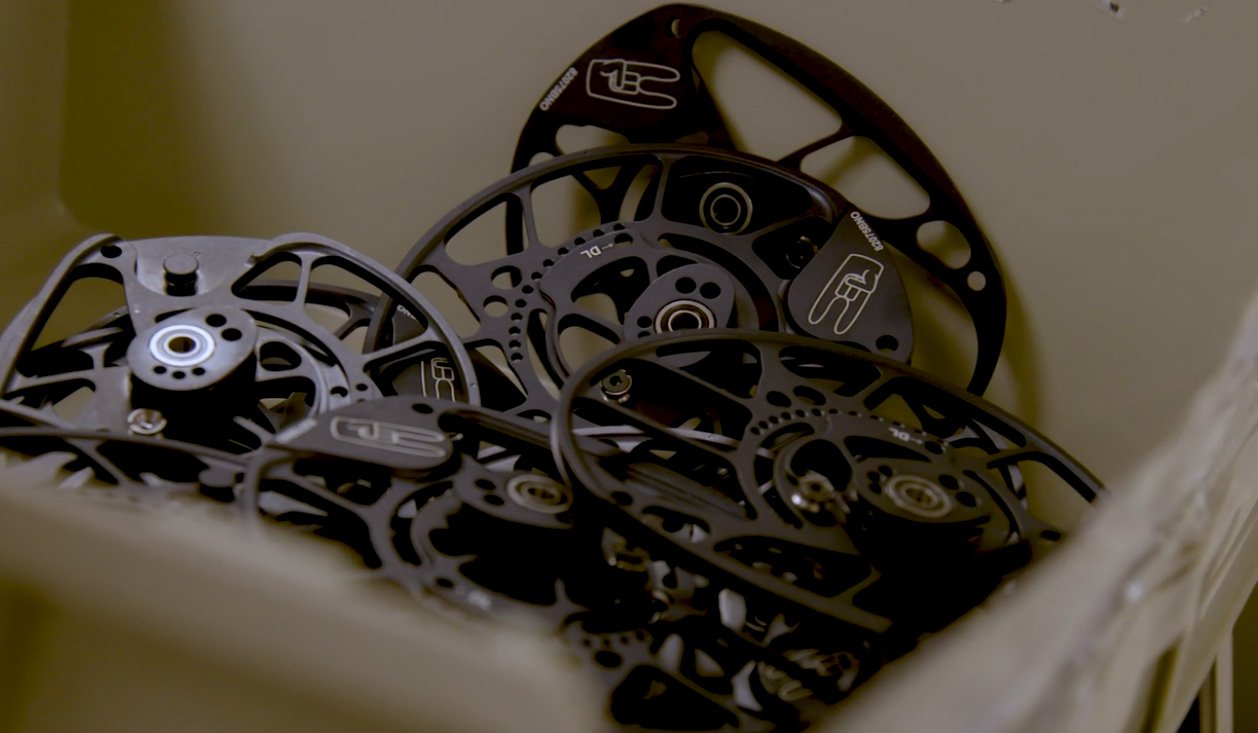 For specifications and more information about the new 2020 NOCK ON® EVO® NTN 33 compound bow, you can go to www.psearchery.com or Click Here.

In this video John Dudley will take you through the features of this bow:

Deer Scouting With A Trail Camera

Deer Scouting with Trail Cameras is a mixed bag. Sometimes the pictures are clear and have deer or other wild animals in them. Sometimes the images are blurry and the deer, etc. in the unclear pictures look awful. Other times something bumps your camera and changes the area where you are taking pictures.

But, all in all, disregarding any pictures that are no good, trail cameras are a swell way for you to learn what is in the area you have the camera pointing at. The pictures we are looking at today are from the same area as the previous trail camera pictures were.

Here are two does. They both are moving through the camera area from east to west. 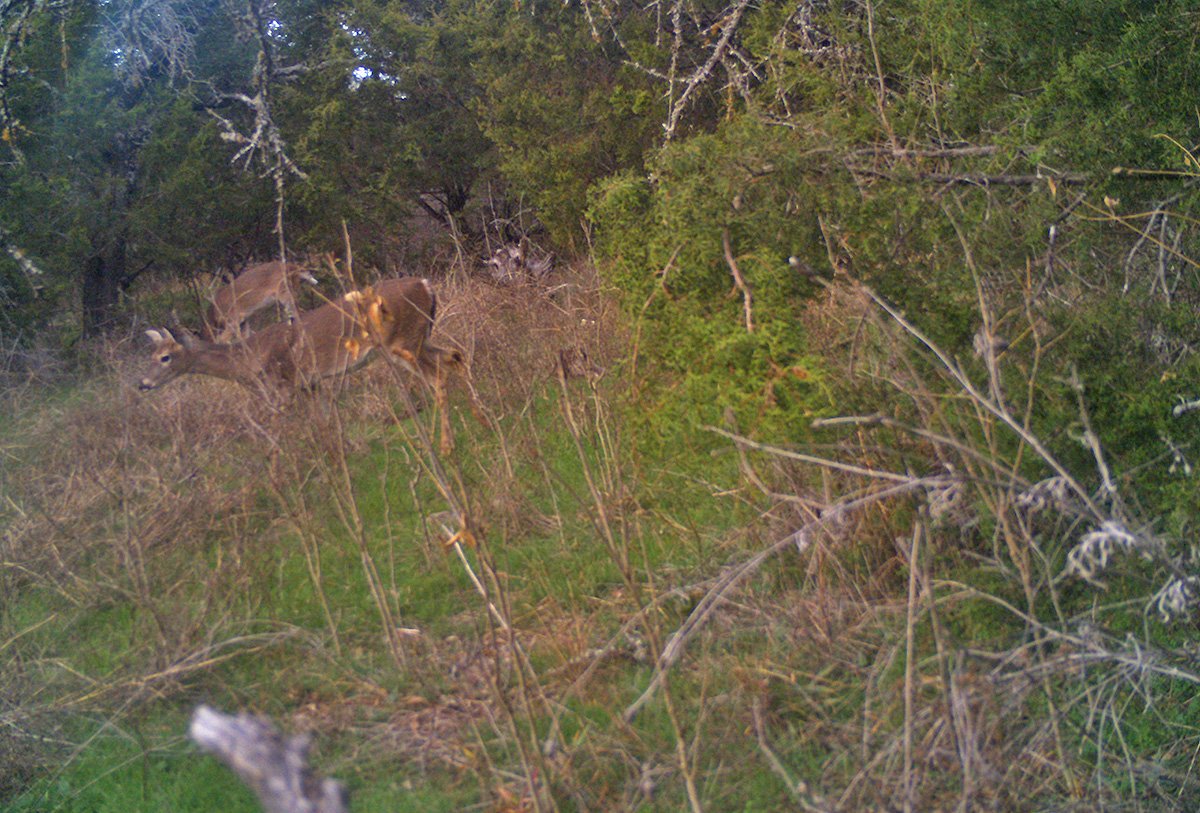 Later on, a doe comes through west to east and a little bit closer to the camera. 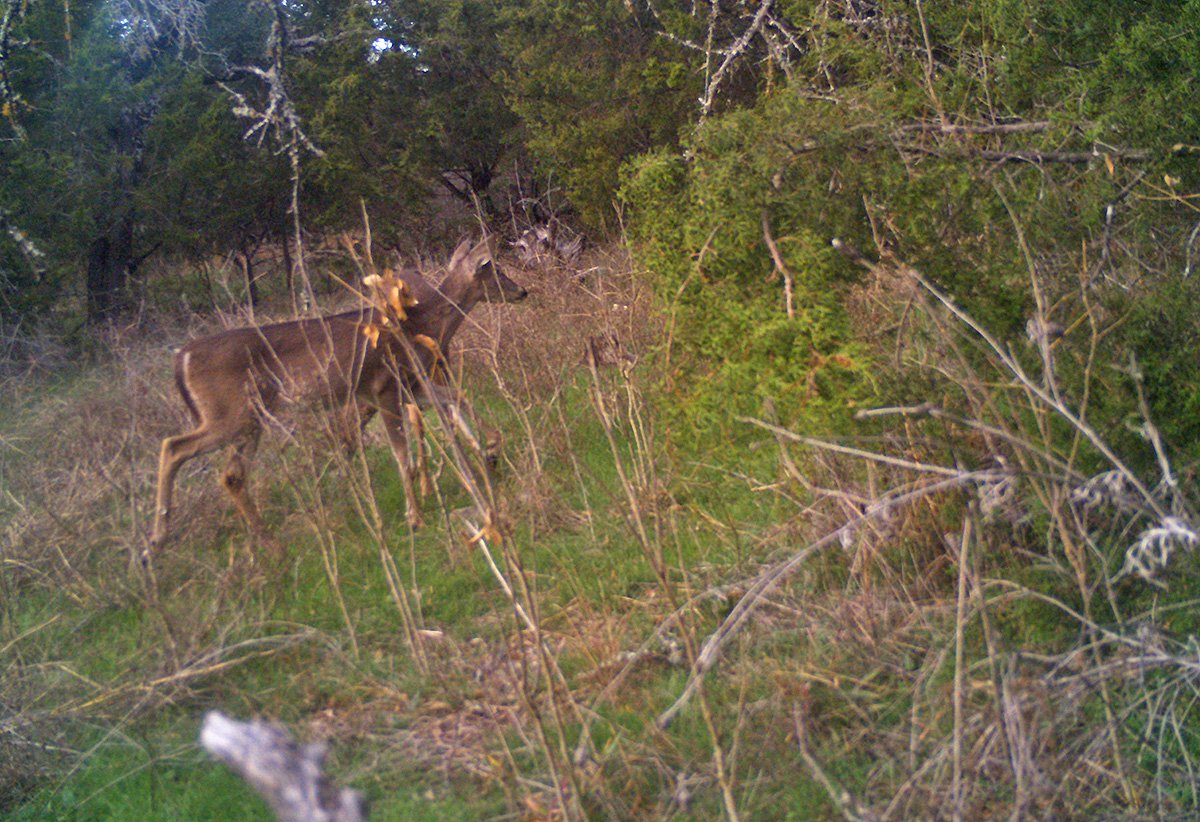 A spike buck was our next visitor. It appears to be walking toward the stob that some of the deer in the previous pictures were checking out. 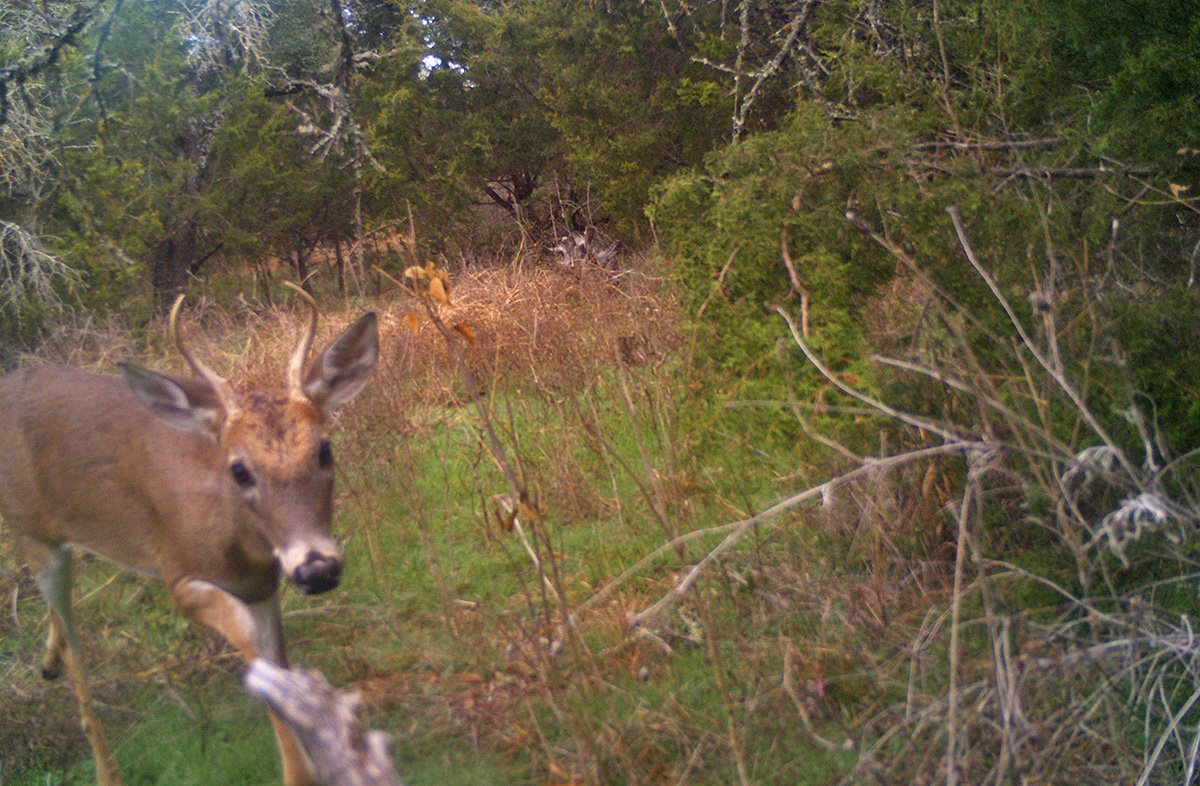 Yep, he definitely was. 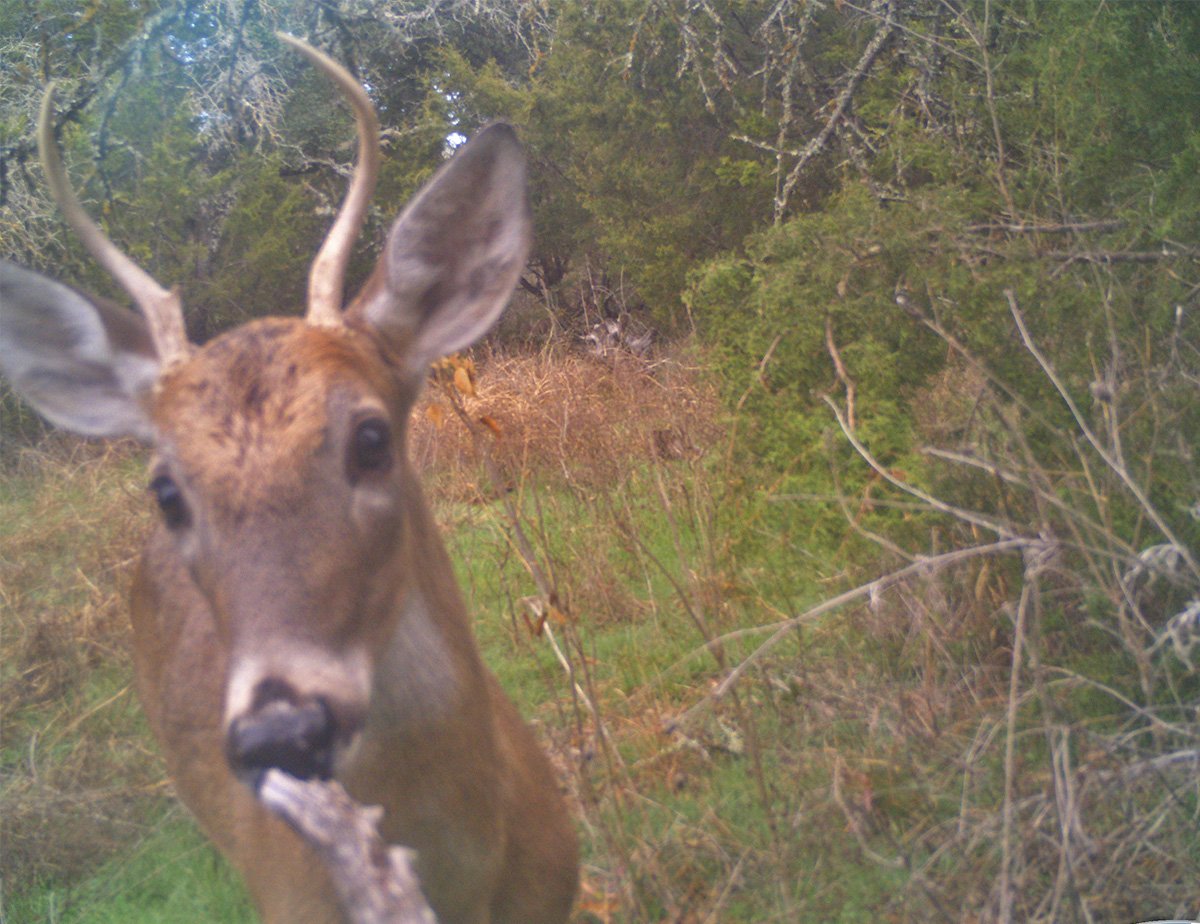 In the next picture, the spike has stepped back and is looking around. 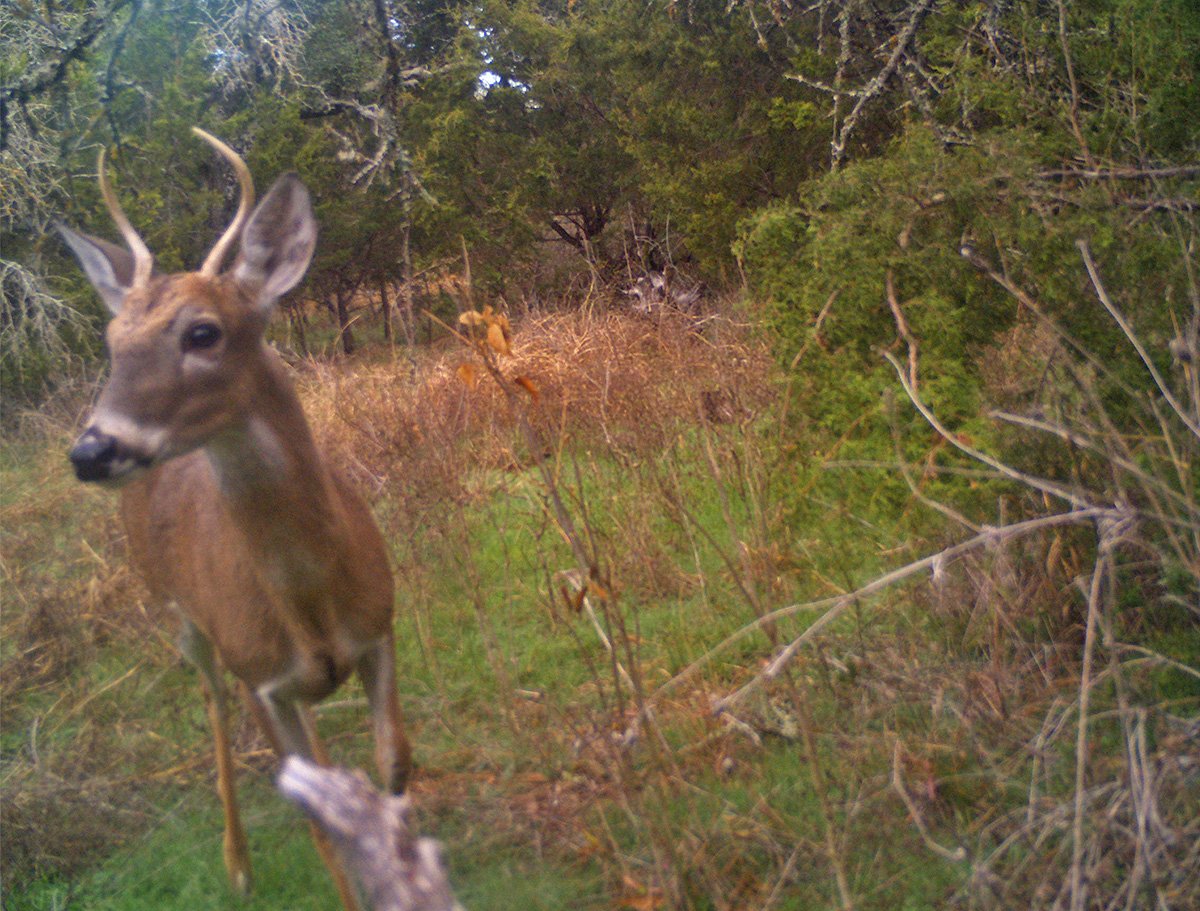 As he turns away the trail camera photographs him again. He has a good-sized body and you may have noticed that his hocks are dark brown. 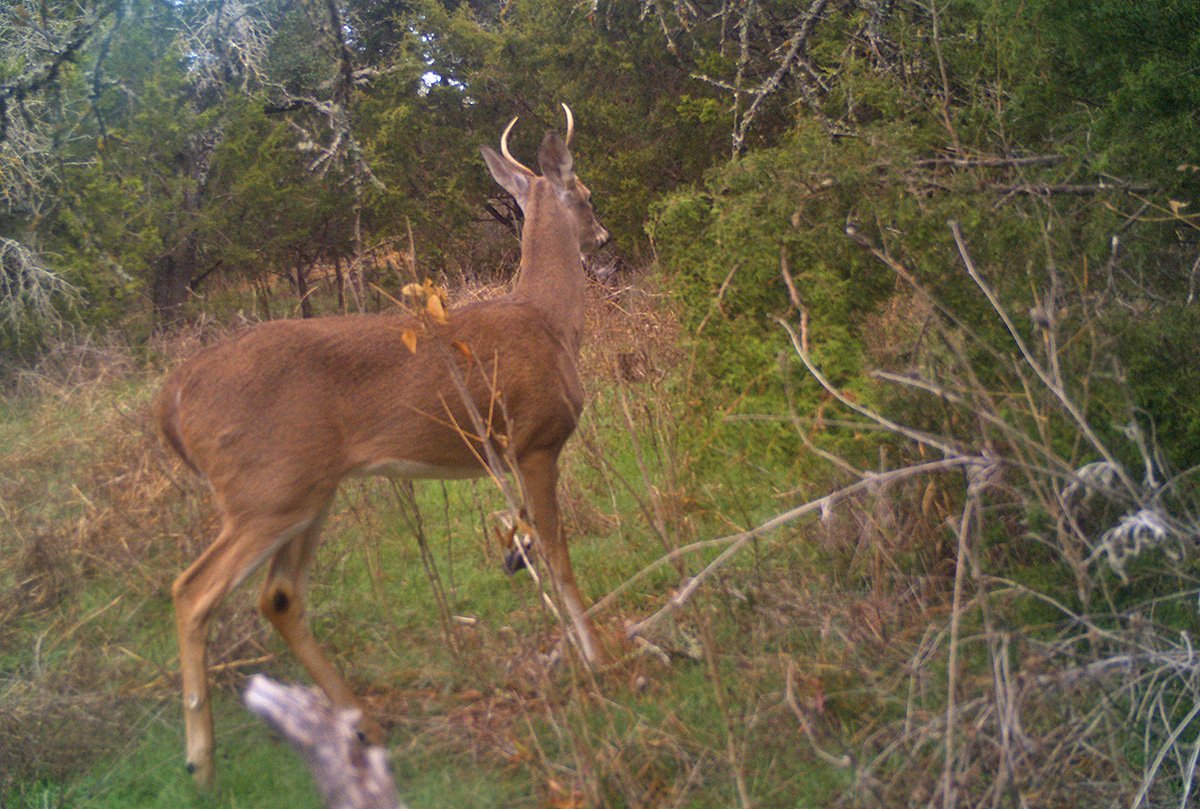 The next day two does walk through south to north. 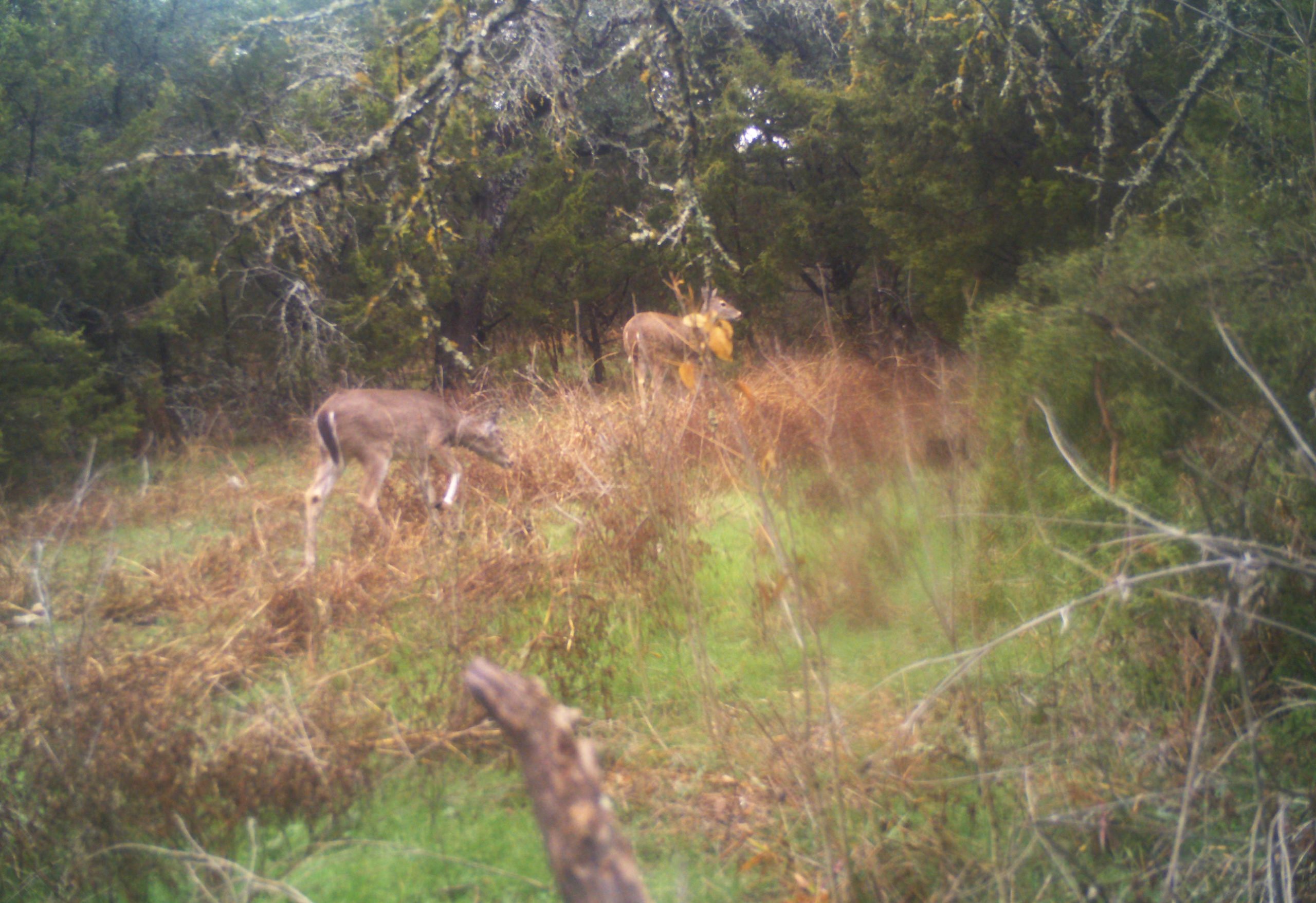 During the night we get a surprise. Those dark images in the picture below are wild hogs. 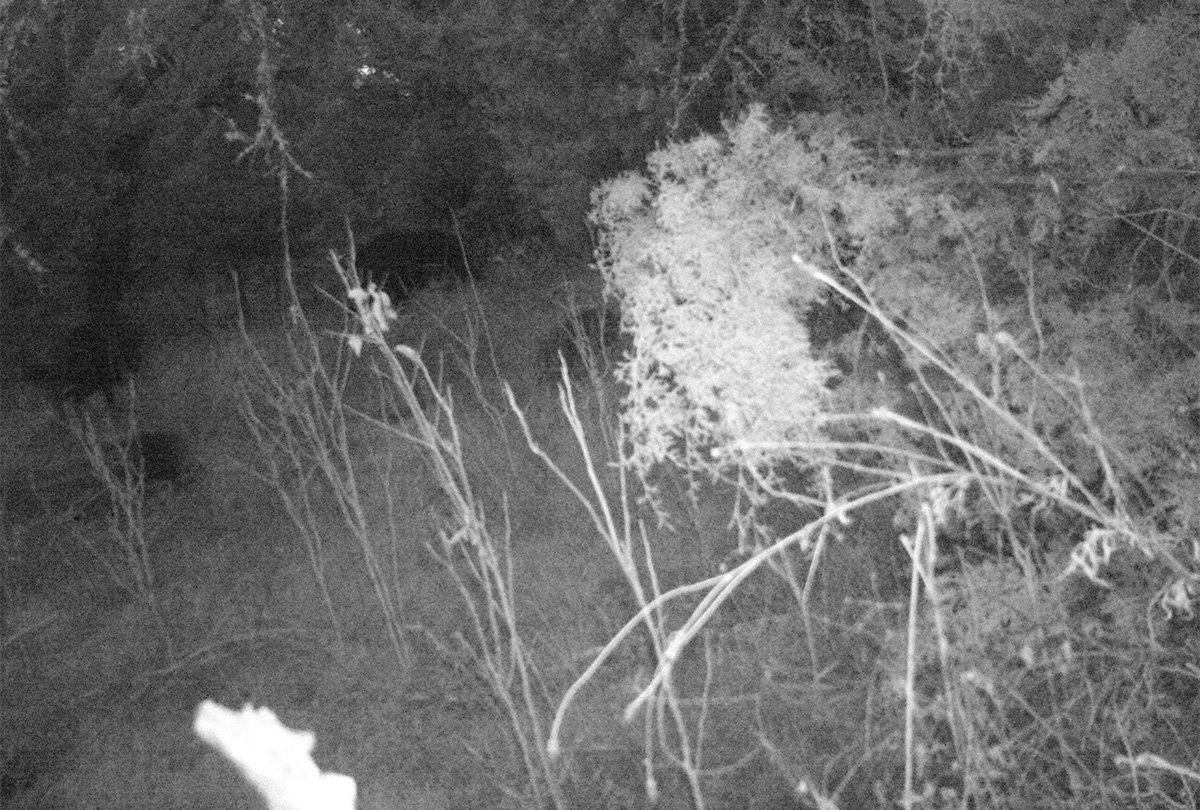 In the next picture, a good-sized wild hog walks through the area. 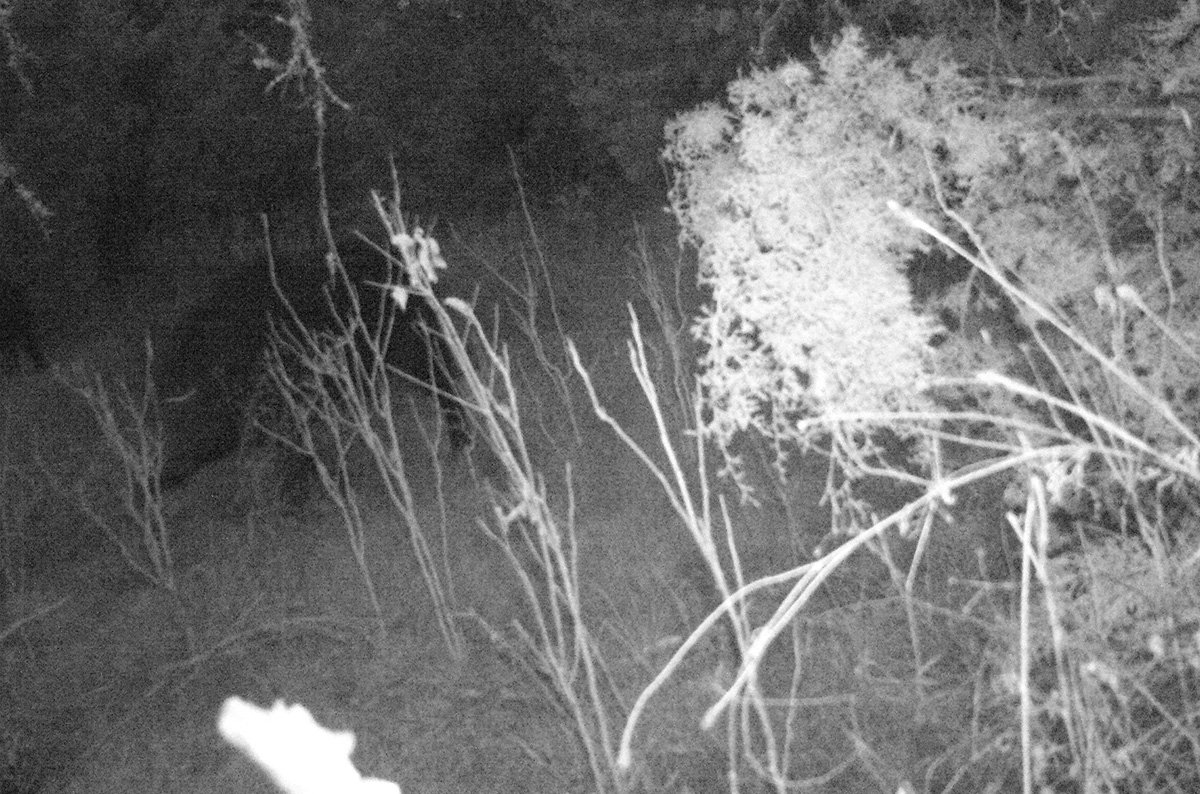 And the next morning we get a photo of the butt of a brown colored wild hog. 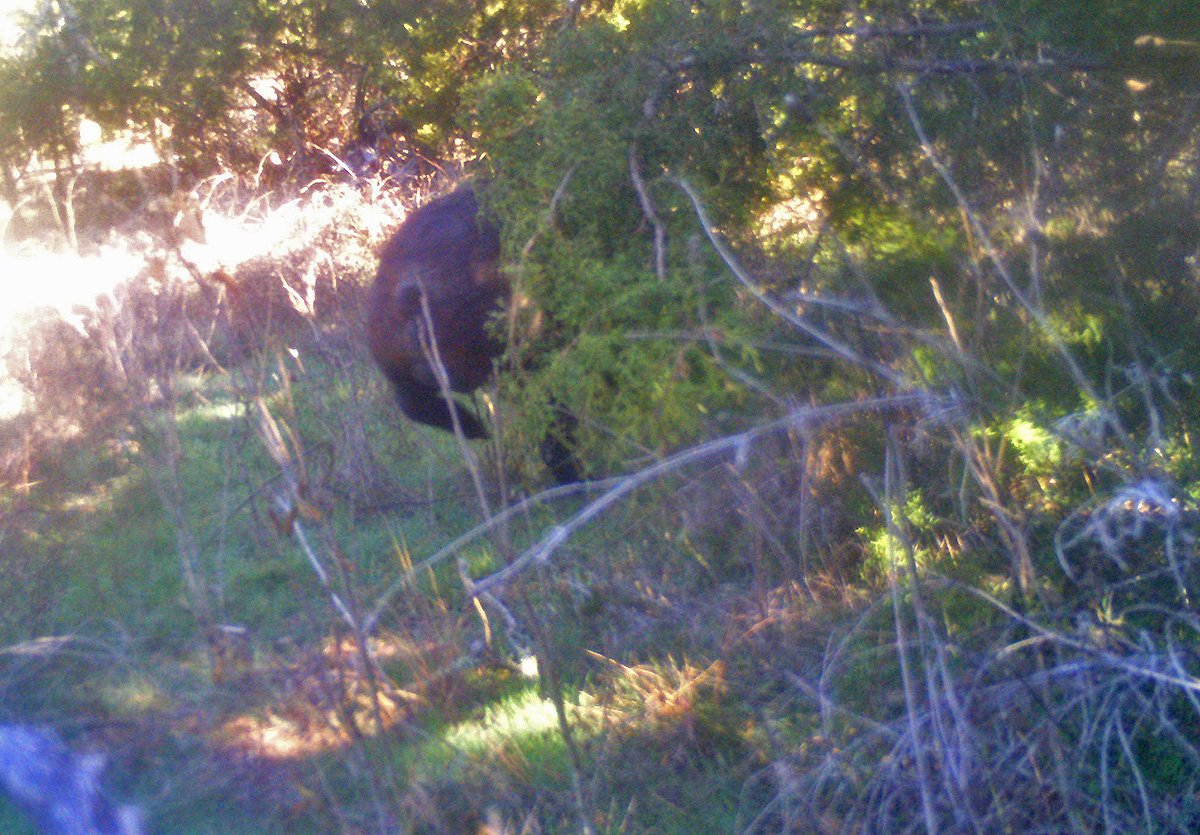 So, here is what we know. Bucks still have not shed their antlers, which is normal here. Usually, they don’t shed them until March. And the dark hocks on our young buck show us that he is looking for, or at least thinking about, meeting up with a doe in rut.

The wild hogs could be passing through rather than hanging out in this area. But, we won’t know until we get some more pictures.

We are in the midst of a crisis.
I know we hear that a lot. There is a reason. When we are told that something is in such dire circumstances that the scenario is at a tipping point to where only a correction made immediately is the only way to have favorable results or everything is lost, it instills action.
Climate change is an example. We have an entire generation that is being taught blindly that without something changing last week that the earth can only survive for a little over a decade. The sense of urgency is important to create change. That sense is usually brought on by fear of something undesirable.
You can even hear it in sports. If a team isn’t performing well and it is approaching midseason, you will hear mention of the moment being critical, whether it be the second half of an important game, the upcoming game, or the next series of games. Crisis mode has been created to put a sense of urgency and complete focus onto something in order to create the change needed to be successful in the team’s goals.
Well, we are in crisis mode in the hunting and fishing community. This crisis is not only bad for the hunting and fishing community, but for natural resources and wildlife as well.
Two decades ago, North Carolina had 399,045 licensed hunting and fishing individuals that created just under $ 9 million in gross revenue. South Carolina had 263,045 creating $ 6.7 million. The United States in whole reported 15.7 million licensed hunters and anglers resulting in $ 688 million.
These monies are important. License sales go to protecting endangered and threatened species, providing habitat for those species, as well as employing officers that focus strictly on those activities.
By contrast, last year North Carolina had 592,564 licensed hunters and anglers bringing in $ 10.3 million in revenue to go to those activities. South Carolina had 200,912 licensed individuals resulting in $ 8.6 million. The US as a whole? 15.5 million with $ 896.4 million revenue.
While we have seen growth in numbers for both NC and SC in licensed outdoorsmen, the United States has lost numbers. We haven’t even mentioned the cost differences from twenty years ago.
North Carolina also increased population by nearly 3 million people over that same time period. For North Carolina, the licensed individuals (I keep mentioning it this way because looking at only license sales doesn’t give a perfect number as many people have multiple licenses) kept up with the population growth. South Carolina on the other hand, lost 62,000 licensed individuals over twenty years while having a population increase of 1.3 million.
South Carolina is an example of what is happening across the country.
With a loss of 2 million hunters and anglers in the US over the twenty-year period while having a population increase of over 50 million, we are losing the ability to protect these species and habitats as we need to. License sales used to nearly supply all the revenue needed. The outdoors community was a self-funded endeavor. Now, we have bipartisan bills in congress providing monies from the general funds as well as allowing more freedom in the uses of monies from past legislation such as that from the Pittman-Robertson act to both protect the species and encourage and recruit new hunters and anglers.
With a world that has increasingly pulled youth to new activities (specialized sports and training, television and video games to name a few), and an older generation that has increased responsibilities and longer work hours in a faster running world, we will all suffer.
The monies in the past helped turn around the potential losses of species such as whitetail deer and Canadian geese to where they are plentiful and thriving. Now, we may end up seeing species suffer.
And this is a true crisis for everyone.

Download the The Walking Dead: No Man’s Land for free from https://spons.org/walkingkendall and claim your Legendary Bloody Lucille which is available NOW for new players!!

SEND ME FAN OUTROS – graygangsquad@gmail.com
(Make a short outro for me! Preferably 10-20 seconds and just thank the GrayGang for watching and being as awesome as they are! www.Kendallgray1.com/shop #Jesus #GrayGang!)

Plaintiffs never compensated for injuries resulting from BP’s negligent and reckless actions. MONTGOMERY, ALA. (February 20, 2020) – Beasley Allen and co-counsel have amended their suit against BP on behalf of three fishermen, Bradley Shivers, Mark Mead and Scott Russell, who risked their own safety to help victims immediately following the Deepwater Horizon rig explosion …