A viewer recently asked for help on figuring out the thermals and wind direction for his hunting property. It’s difficult to forecast how the wind will react to the timber and openings on a property until you get boots on the ground. Thermals are simply air masses moving based on land and air temp. Basically,  … Read more

Hunting Advice and Tips For Serious Deer And Turkey Hunters 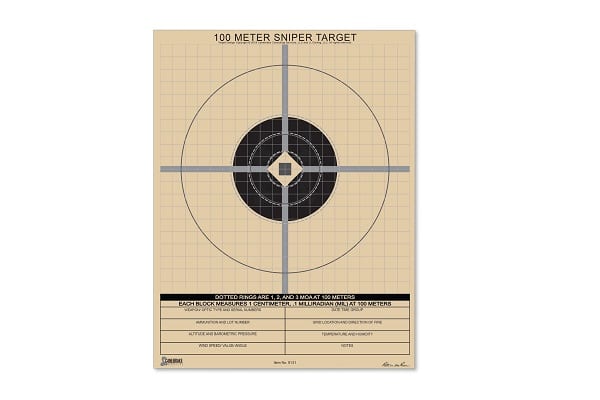 The No. 9131 is a dedicated milliradian-based target for precision shooters. Its 1 cm (1/10 mil at 100 meters) grid is designed for true-distance zeroing. A 1 cm block within the central diamond defines the point of aim when using high-magnification optics. Scaled bullseye and scoring rings represent an MR-1 target presented at 500 meters. 1, 2, and 3 MOA rings check grouping in accordance with published standards. Preformatted fields assist in the calculation of data on previous engagements (DOPE). Durable and weatherproof Rite in the Rain cardstock holds up under rain and through abuse to deliver well-defined groups, no matter the conditions.

About Rite in the Rain
Founded more than a century ago in the forests of the Great Northwest, Rite in the Rain began by developing sheets of paper hand-dipped with a special coating to create a unique moisture shield for use in the logging industry.  Made in the USA since 1916,
Rite in the Rain All-Weather Writing Products circulate around the world in the hands of outdoor professionals working in poor weather.  For more information about Rite in the Rain, visit: RiteintheRain.com.

I jumped on this as soon as I heard about it. The fact that it had an inReach built into it helped because we’d been considering getting an inReach for a while. The Alpha 200i is a tiny bit thinner and has a bigger screen than the Alpha 100, which I’ve used nearly flawlessly for years.

The main reason anyone would have a GPS handheld for upland bird hunting is to track their dogs in undulating terrain where they’re not always visible. The Alpha 100 immediately increased the number of points I was able to get to on each hunt.

I’ve completed 10 hunts of about 4 hours average with the Garmin 200i and TT15 Mini collars. The dog tracking on my 200i is rubbish. At best, it points about 15 degrees from where the dogs actually are. At worst, the compass dial spins and jumps around, or points 180 degrees off (see the video below). I’ve done all the updates on the handheld and the TT15 Mini collars, consulted with Garmin’s tech support team, Gun Dog Supply’s (where I bought it – they’re awesome) tech support (more knowledgeable than Garmin’s), calibrated and re-calibrated the compass, and it’s proving to be worth than useless in locating the dog.

I reached out to some readers who I knew had pulled the trigger on the 200i to see if they’d been experiencing anything like my problems with it. One person said it was working fine for him, but he’d heard from several others who were having similar problems. I immediately flashed back to having bought the Garmin Fenix a couple years ago because I wanted to use a watch instead of the clunky handheld to find my dog, but its compass was also rubbish, and I returned it. I’m not sure if this is just bad luck or if I got a lemon from Garmin (twice), but it seems like they might not have done adequate testing on this in the field before putting it out there for mass consumption.

If you do decide to go for it, and you have issues like this, Garmin’s tech support person told me that they hope users will contact Garmin if they have problems so that they can work on them. This seems bass-ackwards to me, but what do I know? I probably shouldn’t be using these kinds of toys anyway.

The other problem, which pales in comparison to the compass disaster, is that the touchscreen on the Garmin 200i does not work with gloves. WTF? It worked with a “tech finger” glove, but not with a light leather glove. The Alpha 100 worked fine with any glove I threw at it.

Below are some visuals of the issues with my Garmin 200i. At the very bottom of this post are some comparison photos between the Alpha 100 and Alpha 200i.

Versatile Sniper Target Facilitates 100-Meter Zero and Effective Target Practice. The No. 9131 is a dedicated milliradian-based target for precision shooters. Its 1 cm (1/10 mil at 100 meters) grid is designed for true-distance zeroing. A 1 cm block within the central diamond defines the point of aim when using high-magnification optics. Scaled bullseye and […]

“We’ve been working on upgrading our internet presence throughout the year, especially since we have found a sharp increase in online shopping,” VP of Retail Operations, Bryce Wayt, explained. “Our new site makes it easier for people to search for products, especially for those shopping with us for the first time or for the newbie cowboy-action shooter. We’ve organized the products by type and purpose so that a person interested in competition revolvers can easily find what they are looking for.”

The website features easy drop downs appropriately organized for finding products by type, category, and purpose, as well as a robust dealer locator, plus videos, and more.

“We will continue to add to our new website to provide our customers with more information on our products, and of course, our Old West way of life,” Wayt commented.

For more information on Cimarron Firearms and accessories, visit www.cimarron-firearms.com.