The Scholastic Action Shooting Program (SASP) proudly selects Jim Henderson as the Director of Development for newly established International Disciplines of 10 Meter Air Rifle, 10 Meter Air Pistol and Sport Pistol. A decorated marksman with approximately 67 national records including the President’s 100 Pistol Match, which he has also won 9 times. Henderson will […] 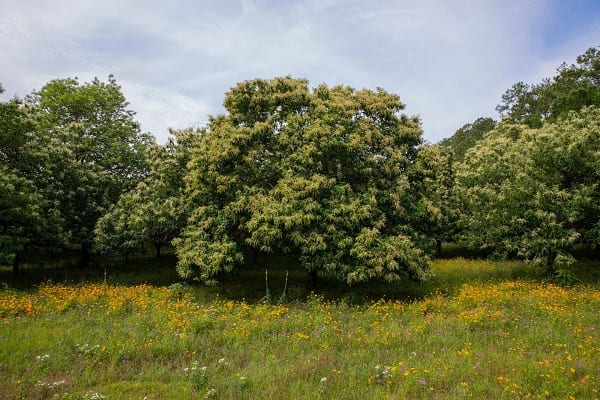 The three essential elements of wildlife habitat are food, water and cover. If you want to be a good steward of the land and attract, sustain and hold more wildlife for a more extended period of time, you need to provide the necessary proportions of all three. Establishing orchards of mast-producing trees like Dunstan Chestnuts is a great way to naturally enhance available food for current and future generations of game and those who pursue them. In most areas, nature provides sufficient water, but you can always supplement it with man-made ponds where necessary. It is the third element that often gets overlooked.

White-tailed deer offers a prime example. Providing food in the form of soft- and hard mast-producing shrubs and trees is a great way to attract them. But they spend the majority of their time in the security of bedding cover, so if you want them to feel more at home on your land, you need to give them a place to stay.

The folks at Chestnut Hill Outdoors are dedicated to helping good land stewards put down roots, improving their land by cultivating living products, sustaining local wildlife and enriching their home ground. That’s why we offer a full range of plants to provide both food and cover.

Evergreens represent one of the best types of cover, and one popular option is eastern juniper or red cedar (Juniperus virginiana). In addition to providing cover for deer and other wildlife, the berries are eaten by several species of birds, and bucks love to rub cedars because of their aromatic bark. Broad-leaved evergreens like Yaupon Holly (Ilex vomitoria), also a native species, will grow into thick groves and provide soft mast for a variety of species.

You can also double up on cover and food by planting soft mast shrubs like blackberries, raspberries and muscadine grapes, of which Chestnut Hill Outdoors offers several varieties. They’ll grow quickly into the dense thickets that deer love for bedding cover and provide food for deer, turkeys and a broad range of game and non-game wildlife.

Chestnut Hill Outdoors is more than just a nursery. We’re continually learning and cultivating the expertise that will help your plants thrive. Got a question or twenty? We’re here to help.

To ensure you receive the maximum benefit from our products, we also provide sound advice and instruction on site preparation and planting, maintenance.

For more on Chestnut Hill Outdoors products and how to care for them, visit ChestnutHillOutdoors.com, or call (855) 386-7826.

Chestnut Hill is the best place for you to purchase your food plot and deer attractant plants because they offer a large selection, their plants are specifically bred to attract deer, and they offer customers different sized plants at different levels of growth.

The Scholastic Action Shooting Program (SASP) proudly selects Jim Henderson as the Director of Development for newly established International Disciplines of 10 Meter Air Rifle, 10 Meter Air Pistol and Sport Pistol. A decorated marksman with approximately 67 national records including the President’s 100 Pistol Match, which he has also won 9 times. Henderson will expertly guide program efforts while advancing the SASP’s mission to promote youth development through shooting sports. Henderson brings expertise and experience from being a member of the US Army Marksmanship Unit and has been a competitor and instructor for over 30 years. Henderson, a former member of US National Team, has also served on the USA Shooting Board of Directors as the athlete representative and is the Civilian Marksmanship Program (CMP) Pistol Program Coordinator.

Henderson stated he is honored to join the SASP team and get to work growing youth shooting sports. “I am excited to see SASP trained athletes become future members of Team USA, and ultimately Olympic Champions.”

“We are confident that Jim Henderson’s expansive knowledge and experience in international shooting sports, both as a competitor and coach, will quickly establish our new air pistol, air rifle and sport pistol disciplines,” said SASP National Director, Rick Leach. “Jim’s experience with the CMP and USAS will help us as we work together with these groups to grow youth shooting sports in our nation. SASP is known throughout the nation as a premier youth shooting sports program and we will continue to uphold that reputation with our new international disciplines guided by Jim Henderson. As USA Shooting’s official youth feeder program, along with the selection of the SASP as the national governing body for the Intercollegiate Pistol Program, made up of a large group of NCAA schools, we are absolutely thrilled to add Jim Henderson as our new Director of Development for International Disciplines to further capitalize on this momentum.”

About the Scholastic Shooting Sports Foundation
The Scholastic Shooting Sports Foundation (SSSF) is 501(c)(3) public charity responsible for all aspects of the Scholastic Clay Target Program (SCTP) and Scholastic Action Shooting Program (SASP) across the United States. The SCTP and SASP are youth development programs in which adult coaches and other volunteers use shooting sports to teach and to demonstrate sportsmanship, responsibility, honesty, ethics, integrity, teamwork, and other positive life skills. The mission of the SSSF is to provide and enhance personal growth and development opportunities for student athlete members; become the premier authority in all things pertaining to firearm-related pursuits for youth; pass on to future generations the legacy of lifelong, safe, responsible enjoyment of the shooting sports. This includes serving as a feeder/pipeline for organized, sanctioned shooting organizations and teams. 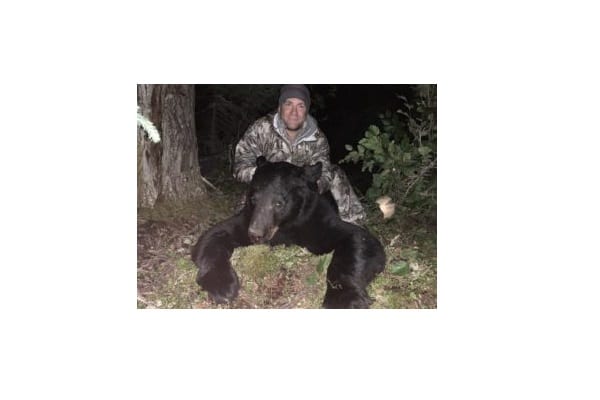 “We are thrilled for Gary as the newest air archery world record holder for black bear,” says Director, Jason Reid. “Gary’s bear paves a way for others, and for the hunting community, proves the ethical power of air archery equipment on tough big game animals.”

“In late August 2019 I had settled into my treestand overlooking a bait site in the Canadian wilderness,” said Gary. “When my target bear fed into range I made the shot. Since the Benjamin Airbow is so fast I wasn’t sure if I hit him or not. The hit was indeed lethal and he didn’t make it more than fifteen yards from the spot of the shot.”

About:
Airgun Hunting Legion is the first and only recognized airgun hunting record book. Airgun hunters can now submit their successful in-field achievements for score and rank in big and small game categories. Airgun Hunting Legion helps hunters find the resources they need through the interactive community website to plan their next hunt successfully and provides exclusive member discounts on hunts and gear Visit www.airgunhuntinglegion.com to become a member and follow AHL on Facebook and Instagram. For more information, email info@airgunhl.com. 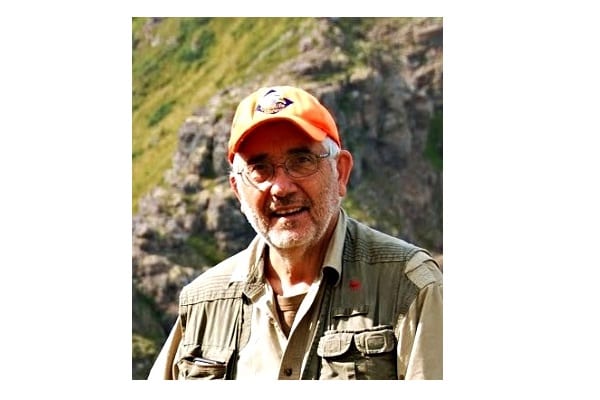 Tim Richardson is a Washington, DC-based public affairs, media, and fundraising consultant. Tim has been Government Affairs Director for Wildlife Forever since 1995.  Prior to that, he worked for Texas’ U.S. Senator Lloyd Bentsen in Washington and was a political journalist in Austin during the 1980s. Tim is rural Michigan native who moved to Texas in 1979.

After a decade in Texas journalism and two years on Capitol Hill, Richardson became the nation’s only private consultant to work on Exxon Valdez and Deepwater Horizon restoration for grant applicants. Clients in Alaska and Texas have received over $ 500 million in oil spill funds for projects involving public and private stakeholders, partners, and natural resource agencies. In addition to oil spill restoration Tim has worked on myriad state and federal government affairs issues for over thirty years.

“Hunting Matters” airs each Saturday from 6am-7am CST on KPRC AM 950 – Real Texas, Real Talk, a Houston iHeartMedia station, and Houston’s longest running radio station. Listen live online here. You may also listen to each episode as a podcast, following live airing, on most major podcast platforms including iTunes, the Apple Podcasts, the IHeartMedia, Google, Overcast, and Spreaker.

About Houston Safari Club Foundation
Houston Safari Club Foundation (HSCF) is a 501(c)(3) non-profit organization whose mission is to preserve the sport of hunting through education, conservation, and the promotion of our hunting heritage. HSCF has awarded 600 scholarships totaling $ 2.7 million dollars. HSCF conducts youth outdoor education programs, career training, hunter education and field experiences throughout the year. HSCF has provided over $ 4 million in grants for hunter-funded wildlife, habitat, and various conservation initiatives. HSCF is an independent organization, is not affiliated with Safari Club International (SCI) or its affiliates and is not a chapter or affiliate of any other organization. Visit our website at wehuntwegive.org or call 713.623.8844 for more information. HSCF. We Hunt. We Give. 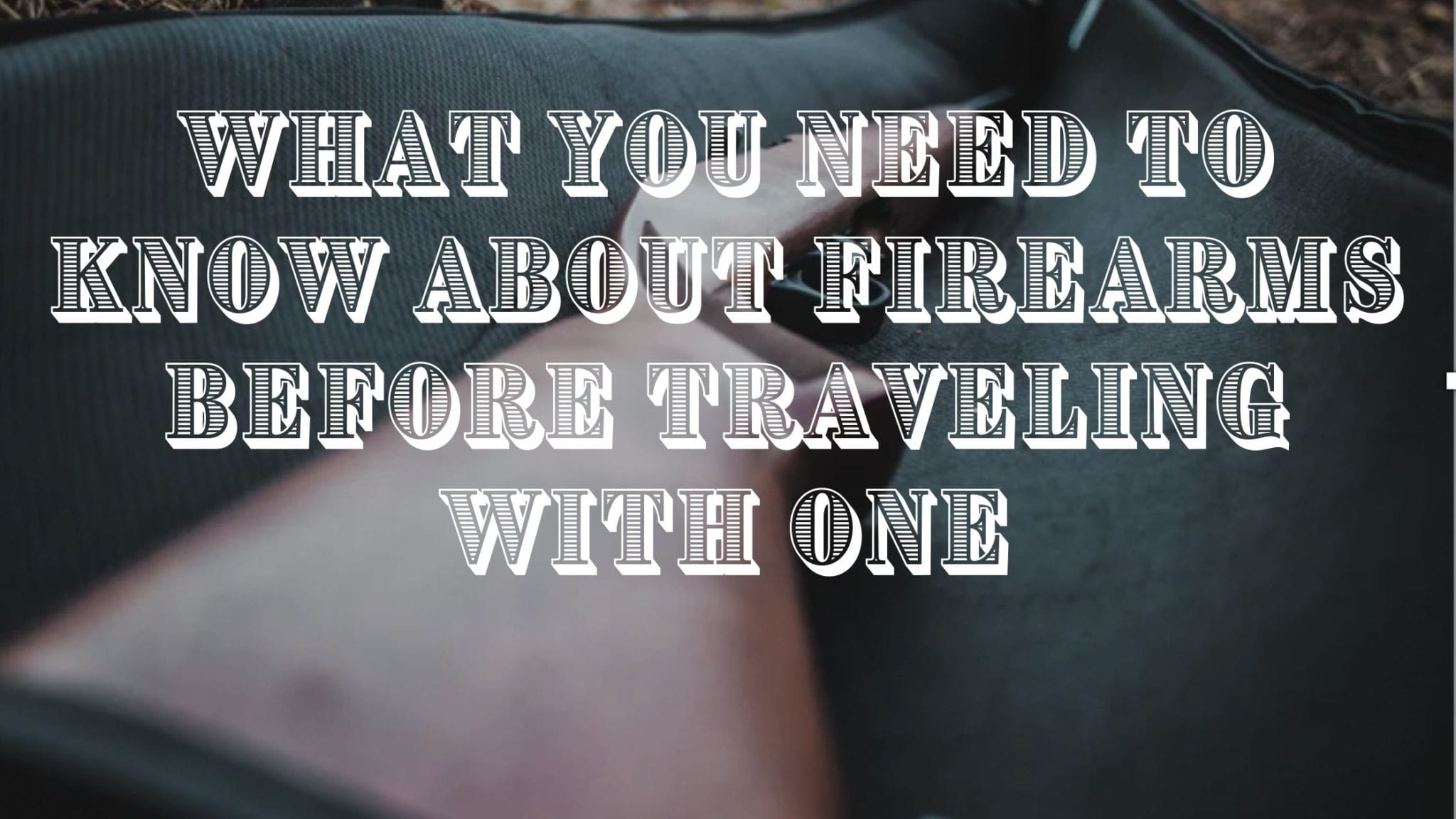 So, are you planning a trip and want to bring a firearm with you? Well, in order to do so, it’s vital that you are familiar with all the rules surrounding this topic before you actually venture off. Why so? Well, when you cross state lines while having a firearm on you, or even when you’re just traveling within your own state, it’s vital that you stick to the rules that are designated by the state in question – otherwise, you are risking facing serious consequences

All of that being said – if you want to learn more about traveling with a firearm, in this article, you’ll be able to do so.

Doing the research is imperative

There are plenty of different ways for you to do this, and in order for you to be safe – it would be best that you seek information from various credible sources. As esports on firearms over at  www.thearmsguide.com explain, if you happen to be traveling interstate in the US, you should know that the NRA actually offers an interactive map that can help you keep track of local laws when you’re traveling. On the other hand, if you are going to a different country, make sure that you contact the foreign embassy in the United States for valuable information on the topic.

Other than that, make sure that you also review the Department of Homeland Security’s rules regarding exporting a firearm, as well as the Transportation Security Administration’s (TSA) rules for flying with firearms and ammunition.

Check your vehicle, luggage, and clothing

Now, this part is pretty much vital since forgetting about something in your possession, perhaps a stray shell from your hunting trip or something similar, can get you into a lot of trouble while crossing the border, and it can easily be avoided.

That being said, if you happen to be using the same luggage for international travel that you sometimes in the past used in order to transport a firearm or ammunition, make sure that you check it thoroughly for any loose cartridges. The same goes for any clothes in which you have carried ammo or firearms. If you really want to be on the safe side, it would be best if you’d use an entirely different set of luggage.

What if you are traveling by flying?

We have mentioned the Transportation Security Administration (TSA) for a bit beforehand, but let’s talk about it in more detail now. Basically, TSA has specific rules regarding flying with a firearm, so, let’s get into a quick run-down of these rules:

To wrap things up

In the end, it all boils down to being careful, vigilant, and taking time to do your research in order to be able to make more informed decisions. The thing is, just why would you risk getting in trouble when all that you need to do is just a couple of clicks away?

Now that you know the basics, all that’s left to do is to narrow the variables down to the specific country that you are traveling to. Good luck, and travel safely!

The post What You Need To Know About Firearms Before Traveling With One appeared first on Hunting and Conservation News.