ACCOKEEK, Md. (January 22, 2021) – Stoeger introduces the latest addition to its airgun line with the S8000-E Tac Suppressed Air Rifle. This new pellet gun offers enhanced ergonomics and features to deliver one of the finest and most accurate airguns in the market at a great value. Stoeger also offers a best-in-class 5-year warranty on all […]

After a trail run today, Leslie and I picked 19 American Dog Ticks (dermacentor variabilis) off of Angus. We found some crawling on us, which we assumed came from Angus, and are included in that number, which is one shy of the record 20 I pulled off of Glenna after a hike a few years ago. I assume that anyone hiking with a dog in the spring knows the drill: caress the fur with heightened fingertip sensitivity, feel for little flat bumps on the skin, and then quickly extract the little nuisances and flush them down the toilet. At least that’s what we do with them. Then we spend a couple hours imagining they’re crawling around in our shorts or on our scalps or in our armpits.

I went googling for info on ticks because I couldn’t imagine any good their existence provided the world. Even worse than mosquitoes, which I know at least provide a food source for trout, ticks just seem like pure badness. They’re creepy, they’re parasitic, and they spread some really horrible diseases, not unlike investment bankers, politicians, lawyers, and crooked CEOs.

If it’s permissible to put a value judgment on an insect (debatable), ticks are good because they help control the rodent population. That’s about it. The bad things they do are more interesting.

Ticks spread Lyme Disease. You can read about it on wikipedia, but I found a post on a forum that paints a clearer picture. This person chimed in on a thread that was being dominated by more scientific types who took the time to explain in biological terms the position of ticks in the greater ecosystem; some even qualified their remarks with the good-science move distinguishing science from morality or judgment (i.e., “ticks are what they are”). Some of the posters, however, couldn’t refrain from saying that because of the “good” ticks provided their habitat, they were better than humans. Enter this poor soul:

When a tick pays for my medicine, doctor and emergency room bills, I’ll think about “save the ticks.” I have Lyme Disease. I know what a Neurologist is. I know what an epileptic seizure is. I know more medications than I should. I sometimes have a hard time walking to get my morning newspaper. I haven’t run in 4 years. I can’t SCUBA, Frisbee, sail alone, ski, walk on boulder jetties, drive (without a lawyer), I golf like a loser, can’t throw a (base, foot, snow)ball without falling. I have vertigo, I can’t climb a ladder; I used to climb a mast on a sailboat underway to change a lightbulb. I lost my “sea-legs.” I lost my Captain’s License, driver’s license is in perpetual limbo. Have a “spaz” lose a license. Sometimes I use a cane. Part of running around is risk. I got whacked… I’ll be an adult and NOT sue someone. I’ve been beaten, stabbed, robbed, left-for-dead, shot at… Lyme scares me the most. There is nothing I can do now.

Ticks spread other diseases, too, such as Rocky Mountain Spotted Fever, anaplasmosis, tularemia, and – my personal favorite – 364D Rickettsiosis. None of these are any fun. The key is removing the tick before they have a chance to get deep into their feeding cycle, which sometimes takes over 24 hours. I read that as many as 50% of the ticks out there carry one of these diseases, some of which are species specific.

American popular culture has a fascination with strange and gross things. Ticks pop up here and there. There’s a cartoon I watched on Saturday mornings back in my thirties. It’s called The Tick, of all things, and was based on a comic book character and spawned an even weirder TV series starring the guy who played David Puddy on Seinfeld (Patrick Warburton). Then there is the 1993 horror film Ticks, which marketed itself with the line, “It’s not nice to mess with mother nature.” Do me a favor and don’t see it. Do me a favor and do listen to “The Ticks” girl band if you want to run screaming from your computer. And do your dog a favor and get those ticks off of him or her before they do some serious damage. 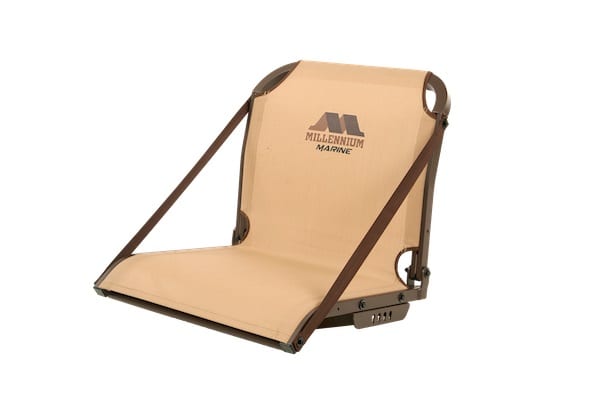 Pearl, MS (January 20, 2021) – If you spend a lot of time in a vehicle of any kind, you know how important having a comfortable seat is. Adjustability, lumbar support and breathable fabric are just three key features you want and need.

Boaters are no different, which is why more and more are making the switch to Millennium Marine B100 Boat Seats every year. Now available in tan (B-100-TN), as well as gray and green, these top-shelf boat seats feature the company’s legendary ComfortMAX breathable seat fabric, which has been designed for years of use and abuse and is modeled after Millennium’s state-of-the-art deer hunting stand seats. It features ComfortMAX contouring for unmatched coziness, with included armrest straps for additional comfort. You can say goodbye to wet seats with this innovative seat design. It will not hold dew on early-morning trips, drains water even in a downpour, and dries quickly. Morning dews and downpours cannot keep this chair wet because it all just drains away. And unlike rubber and foam seats that break down and rot over time, in inclement weather and under the sun’s UV rays, the ComfortMAX seat has been treated for mold, mildew, and UV resistance so that it will excel in use in all temperatures and weather conditions.

The seat features a sturdy all-aluminum construction with no plastic parts for lasting durability. It also folds flatter than any competitors’ seats, so they are entirely out of the way when need be. They can be mounted to any standard boat seat pedestal.  Millennium Marine stands behind every B-Series seat with a one-year warranty. Available colors include gray, green, and the just-introduced tan.

More information on these, and other high-quality Millennium Marine products, can be found at www.millenniummarine.com.

At Millennium Outdoors, manufacturer of Millennium Treestands, Ol’ Man Treestands, and Millennium Marine, we are committed to ensuring each hunter and angler can make the most out of every season, from the big bucks in the fall, to gobblers in the spring, from redfish on flats to crappie and bass in lakes, and every species and season in between. From innovative hang-on and ladder stands to ground blind chairs, fishing seats, and rod holders, Millennium Outdoors and its brands are dedicated to providing quality products to avid outdoor enthusiasts. Millennium’s reputation has been built on comfort, safety, quality, and versatility that hunters and anglers recognize and appreciate. More information on all the company’s products is available at www.millenniumstands.com.