If there is anyone who knows how to get it done on the ground with whitetail deer, it’s Garrett Roe, owner of Heads Up Decoy. In today’s episode, Garrett walks us through his most effective strategies for using his portable, lightweight decoys during the whitetail rut.

He also shares what scenarios to look for to have the best chance at success on a mature buck.

When it comes to whitetails, the most effective habitat management plans are those that provide proper year-round nutrition through planting a variety of crops for different seasons. The variety of plant species that whitetail prefer can have vastly different seed sizes and planting prescriptions. That presents a problem if you’re not properly equipped, and it […]

Goat Tuff Products, known for its glues, vanes and other innovative products for the archer/bowhunter proudly announces its newest product, GT 100

This amazing liquid does it all. GT 100

not only penetrates the material but provides a protective ionic bond that overcomes surface friction to reduce wear and increase performance on all moving parts. It also quiets and protects the parts while penetrating, removing and preventing rust.

Goat Tuff Owner Jerry Smith noted: “GT 100 Ionic Bond Lubricant is truly a revolutionary product. The specially formulated synthetic components provide extreme protection and lubrication while the bio-components actually form an ionic bond that attracts the lubricant to the surfaces it is applied to. The low viscosity coupled with the bonding nature penetrates to overcome surface friction.  GT 100

won’t attract dust or dirt, is non-toxic and has no odor. It is the kind of equipment saving, performance enhancing lubricant we’ve all been looking for.” 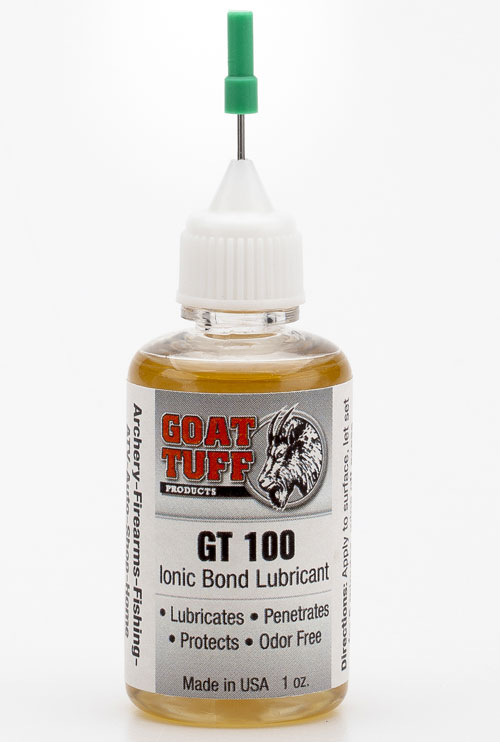 is perfect for all uses in sporting equipment, hunting, firearms, archery and fishing tackle, automotive, ATVs, home and shop and is Made in the USA.

These are four of the most entertaining and knowledge-based deer hunting channels on YouTube.

Online deer hunting videos are here and they’re getting better by the year. With more deer hunters heading to YouTube channels to get their hunting fix, high-level producers are collaborating with some top talent.

As producers improve and high-level talent releases deer hunting videos on YouTube, we’ve begun to see a handful of channels rise above the rest.

Drury Outdoors has been in the outdoor entertainment industry for a long time. They’ve always quickly moved to where the attention is headed. This is good news for big-buck fans, as they can now watch top-tier hunting shows on Drury’s YouTube channel. They have different video series on their channel that provide both entertainment and whitetail deer knowledge.

Everything on their channel is fair-chase hunting, which is why it finds a place on our list of the best hunting YouTube channels.

Dan Infalt is one of the most renowned public land hunters of our time. This Wisconsin native mastered the art of hunting bucks, with a run-and-gun approach as well as a portable treestand. He releases long and short videos of hunting strategies paired with valuable information. His hunting adventures will captivate any serious deer hunter, so check them out here!

Jeff Sturgis runs a blog and a YouTube channel, where he displays his in-depth approach to hunting bucks in the U.S. His content is geared more toward land managers and owners. However, the information is applicable to anyone who wants to learn more about hunting mature bucks. The strategies he provides are things he’s been testing since the 1980s. Jeff’s philosophy has helped people hunt more effectively and successfully. It’s for this reason he finds himself in a spot for one of the best deer hunting YouTube Channels.

The Hunting Public is an online video series that releases new videos of public land adventures. This channel highlights bowhunting strategies that anyone can implement. Above is an example of one of their public land hunts in Iowa.

After watching any of these channels, YouTube will lead you down the wormhole of fantastic deer hunting content. You’ve been warned!

NEXT: #VELVETFEST: THE OFFICIAL START TO DEER SEASON!

What is a pinfire cartridge?

It was, however, a step in the evolution of the self-contained cartridge.

Way back in the 1830s, Frenchman Casimir Lefaucheux came up with the pinfire concept, which was finally patented in 1835.

This was the first, somewhat-practical self-contained cartridge in the time of muzzleloaders. During the Great Exhibition of 1851 in London, the pinfire cartridge quickly gained popularity. A pinfire revolver was quite a popular weapon, particularly in France, due to the quickness of reloading.

Even pinfire shotshells were available with the pinfire ignition system.

Pinfire cartridges relied on a firearm’s hammer hitting the small pin to ignite the powder charge within. The firing pin was technically contained inside the cartridge, unlike a centerfire or rimfire cartridge system. While this system was more weatherproof than traditional muzzleloading weapons, it was far from perfect. An impact to the pin could set off the cartridge outside of the weapon, causing disaster for anyone nearby. Loose carrying of cartridges was a dangerous idea. One pinfire cartridge going off in your pocket would certainly ruin your day.

When rimfire and centerfire cartridges came to the market, the doom of the pinfire cartridge was inevitable. While it may be obsolete now, for nearly two centuries, there have been a handful of collectors and pinfire shooters who still reload their own cartridges. With reloading kits now available, these old guns occasionally still speak after many years of silence.

NEXT: SUNDAY GUNDAY: 6 AGE-OLD GUN CLEANING TRICKS THAT WILL AMAZE YOU