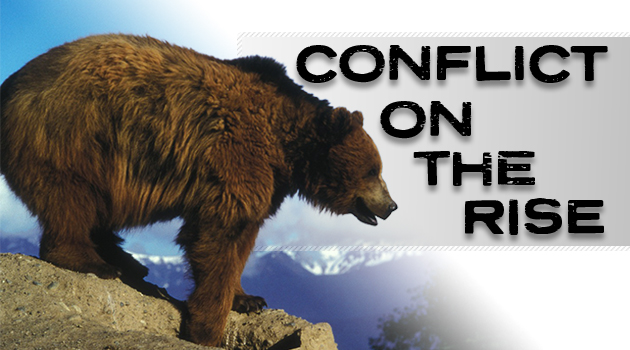 Deaths of grizzly bears in the Greater Yellowstone Ecosystem (GYE) are on track to set a new record in 2018. Just since September 1, 11 bears have been euthanized, bringing the year-to-date total up to 58 with the high-conflict fall season just unfolding. 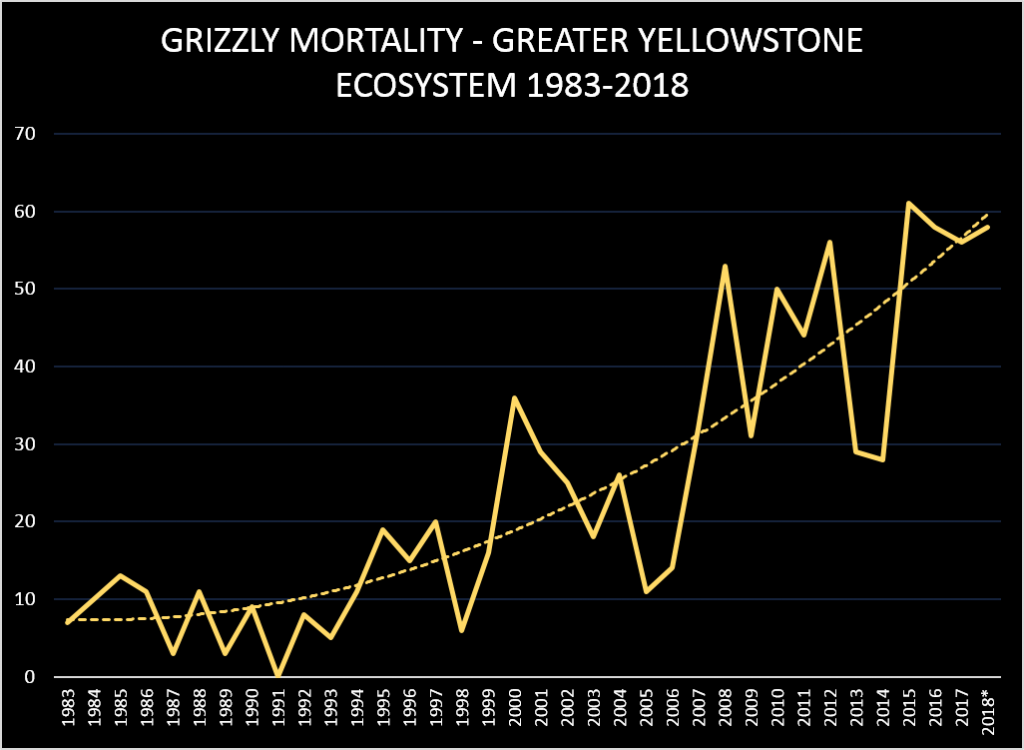 Too Many Deaths or Too Many Bears?

If you do the math, 55 dead bears out of an estimated population of 800 is about 7%. The reason that concerns people is that grizzly population growth, which around Yellowstone was 4%-7% per year from 1983-2001, has slowed in recent years to more like 0%-2% due to fewer cubs and yearlings surviving. Since 7% is significantly more than 2%, people are concerned that the total number of bears is declining. Of course, that growth rate is after counting mortalities from different causes, but still there is no doubt that fatalities from human-bear conflicts are increasing. Add proposed hunting seasons of say 22 bears on top of that 55 and you have fuel for an intense debate.

On the other side are people who point to the big increase in human-grizzly conflicts as evidence that the bear population is too high. They will point to at least one study that shows the GYE is about at carrying capacity, one evidence for which is the increasing number of grizzlies spotted outside the GYE and closer to human habitation and livestock.

What’s behind the increase in human-grizzly conflicts and the number of dead bears, especially since grizzly numbers in the area have been relatively stable at around 750-800 for several years?

All you have to do is look at the sea of brown pine trees on Rocky Mountain hillsides that used to provide pine nuts for grizzlies to see one reason. Whitebark pines are down more than 70% and their fatty seeds were often a staple of grizzly diet in the fall and to a lesser extent in the spring. One study showed that the reason for bears being lower and closer to homes is that bears stay higher when whitebark pine nuts are plentiful.

Another is the huge falloff in cutthroat trout numbers, another bear staple. Add in lackluster berry production, another casualty of warmer weather, and it’s not hard to imagine that grizzlies might increasingly be feeding on elk quarters or gut piles and livestock. To a hunter, a gunshot often means hundreds of pounds of great eating and maybe a trophy set of antlers. To a bear, it’s a dinner bell. When they show up at the table, they are rather impolite and don’t share well. Several years ago, 20% of fatalities were from self-defense. That percentage has been going up.

Another issue is that bears are increasingly being encountered outside the Demographic Monitoring Area (DMA). The leading cause of grizzly mortality (34% back in 2010) has been being euthanized for being too close for comfort to expanding civilization, if you want to call it that, and that percentage is increasing. Montana has also had 11 bears die from being struck by cars this year. Add in several percent more for livestock damage and about half the mortality has apparently been due to bears and humans each expanding their range. Poaching deaths and uninformed hunters misidentifying bears likely are more prevalent when bears come to town, or at least closer to it. The same goes for “problem bears” being euthanized.

Neither hunters nor anti-hunters want to see grizzlies dying from being euthanized, well, at least not in general. When a grizzly is on your porch or in your herd or charging you as you quarter an elk, you might feel differently. But overall, reducing bear-human conflicts is a good thing.

What can be done about it? Well, there are some ideas, but since I’m out of space for now, I’ll just throw it out to you. How would you reduce dangerous grizzly conflicts and fatalities?