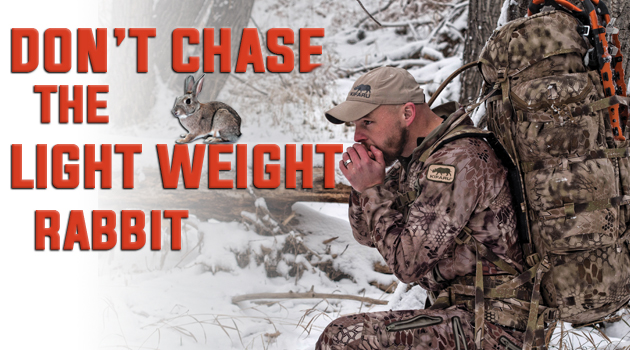 An early snowstorm was hitting the high country and my hunting partner and I were socked in as bad as you could imagine. To save weight, our choice for this trip was a tiny three-season, two-man shelter and we were seriously regretting that decision. To add insult to injury, my hunting partner decided to bring a 30-degree sleeping bag with him (to save weight) and at this point the temperature was dipping below 20 degrees. In all fairness, I pulled a few level 3 chucklehead gear decisions myself on this trip and we were both living in misery because we started chasing the ultralight rabbit.

That ended up being one of the most miserable trips I’d ever been on and in reality, 3-4 more pounds in gear would have made a HUGE difference. When I look back at this, I don’t even know why we even tried to drop weight from the pack anyway. It wasn’t like we were out of shape. It was more because we got caught up in the ultra-lightweight fad and having the lightest pack was like a badge of honor or something. Well, that badge of honor became a jackass trophy real quick and anytime my friends and I start talking about dropping weight someone will always say, “Don’t chase the rabbit!”

As a quick reference, I will give you type a list of what our actual pack weight would have increased if we would have brought our standard gear instead of the ultra-lightweight stuff. 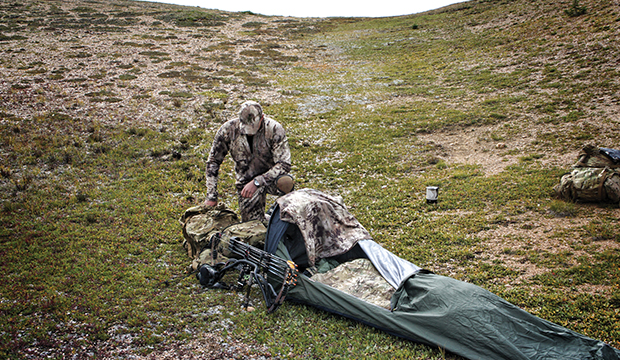 Sleeping bag – Going from a 30-degree bag to a 15-degree bag will only add a pound at most, all things being equal. 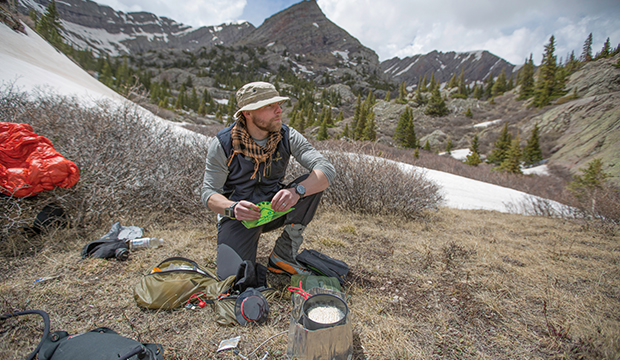 Stove and Fuel – I had the bright idea of bringing an alcohol stove for this trip, as it was the new “cooUL” thing to have and would shave several ounces of my normal stove. At most I would have picked up another pound but to be safe, let’s say a bombproof stove would add another 24 ounces. 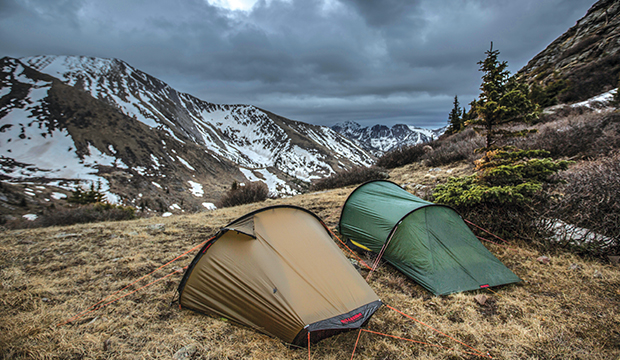 Shelter – It’s not uncommon for two guys to use the same shelter for weight savings, but a two-man tent is far from fitting two men with gear. We knew that going into it and figured it wouldn’t be a big deal since we’d only need to sleep in it and we could keep our gear on the outside of the shelter – wrong! The two-man shelter we packed in was just under 3 lbs., so at almost 24 ounces each we did save a decent amount of weight. Looking back at that trip and remembering the misery I was in an extra 2 lbs. each would have been easily worth the extra pack weight. 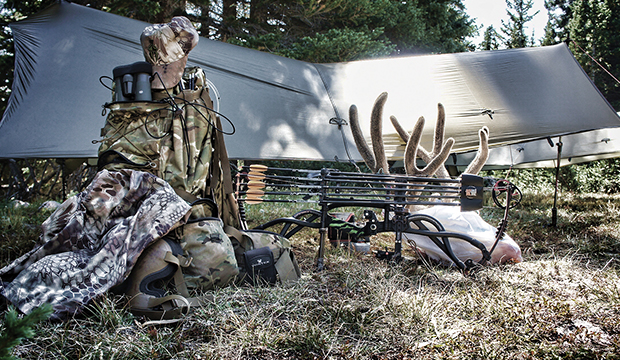 Clothing – Without going into a long drawn out clothing list, I’ll just say that a 20 oz. insulting jacket would have done wonders for my motivation!

For roughly a 5-6 lb. weight increase in my pack, I would have been a lot happier and not living in misery for several days. I also would have made it the entire hunt instead of heading back early because I was mentally checked out by day five from lack of motivation. The issues we faced were a direct result of the weather but there are several other issues that can cause ultralight gear to be a poor choice sometimes.

Think of it this way – if someone is only going for one or two nights, he can get away with just about anything. On the other hand, if a guy is traveling overseas, doing an extended trip or in our situation, hunting in poor weather conditions or doing several backpack trips in a row, gear failure cannot only be a real inconvenience, but it can drive you off the mountain and be very dangerous too.

Now you’re probably wondering what gear you should actually purchase and not have to worry about it failing. How light is too light? There’s several variables I take into consideration when purchasing anything new and in some cases I will have two or three of the same items in one category. It can be a tough decision at times no doubt but here are a few things to think about before making your next purchase.

Budget
If you’re on a tight budget, buy what YOU KNOW will last but you can also afford. If your budget is decent, buy the very lightest piece of gear that is available. If you’re budget is close to being endless, buy gear for multiple situations.

User reviews and specs
When looking at a new piece of gear I will always read up on the specs, look for red flags and then ask someone I know if they’ve used it. If all of these things line up, I will be getting it for some testing of my own.

The test of time

This is by far the best test of all. If something has been sold at mountaineering stores for a few years and little to no modifications have been made, then chances are they got it right and it’s a solid piece of kit.

Those three things are what I focus on most (especially when I’m on a budget) when choosing gear, but that doesn’t mean they’re fool proof. I strongly suggest you test everything in depth before heading into the field.

As sure as the sun will rise tomorrow, I can guarantee that you will give up one or more of these things when you start chasing the rabbit. Using sleeping bags as an example let’s take two high quality sleeping bags at a 20-degree temp rating and put them side-by-side. One of these bags will be made of an ultralight outer shell and the other a windproof/water resistant fabric. The ultralight version will obviously weigh several ounces less, size being equal.

That doesn’t mean one of them is warmer than the other, but the lighter version could have a higher quality insulation (more money) and a thinner outer layer (less durable and water resistant). While both of these sleeping bags have their place, the ultralight version could get you into trouble in wet climates. This is a very good example of when to make a conscious decision of chasing the rabbit.

Now, you’re probably thinking that I’m one of those guys that packs everything but the kitchen sink with me on each trip – that is not the case. I have some items in my pack that definitely get swapped out depending on the mission but other items will never leave my pack. So how do you go about choosing the items that stay, leave or get exchanged? For me it’s simple and here’s the list I go through when deciding what makes the cut for my next adventure.

Weather Forecast – Not too difficult to figure this out. Look at the extended forecast and pack accordingly. There’s no good reason to leave an insulating jacket at home if cold weather is in the forecast, as you are only adding 16-24 ounces of pack weight. The same can be said for ultralight or durable rain gear. I would choose an extra pound in rain gear if I were heading to the Alaskan coast for a hunt, but grab my ultralight set if heading out to Colorado for an early season mule deer hunt.

Length of trip/hunt – Pretty much anyone can handle gear failing on an overnight hunting or scouting trips, but ultralight gear can really cost you on extended stay adventures. Something like a failed shelter on a 10-day backpack sheep hunt can send you home early and as much as sheep hunts cost these days, an extra few ounces isn’t that big of a deal when looking at the bigger picture.

Location – When I say location, I’m not talking about what side of the mountain you’ll be hunting but more what part of the world you’ll be hunting in. If someone is flying out of the United States, then a multi-fuel stove is a far better option than a canister stove. You’ll find an 8-16 oz. weight penalty with the multi-fuel stove but the added weight isn’t a big deal for what you potentially gain. The canisters can be really hard to find and you can’t fly with them but you can use just about anything with multi-fuel stoves. The multi-fuel stoves are also a lot more durable and work well at any altitude and temperature. Stove choices are just one example of many when trying to chase the rabbit, but again, is saving an extra pound worth the potential risk?

Distance traveled – This is in reference to how far you’re hiking in and not how far you’re traveling from home. If someone was hiking two miles in for a backpack hunt, then something failing isn’t a huge deal and most people can deal with a large amount of pain for two miles. Now if you flip that coin over, you don’t want to chase the rabbit to much if you’re hiking 20 miles in either, as gear failure and discomfort really can suck then. Having said that, I will generally haul in more than I should on hunts closer to the road and use trusted ultralight gear when going in deep. Either way the distance you are hiking in should always be taken into account.

If you take anything away from this article, it should be that going too lightweight with gear can potentially cost you the hunt, make you suffer and be dangerous. You’ll always want to assess every hunt according from the things I’ve talked about in this article and choose your gear accordingly – and do your best not to chase the lightweight rabbit.