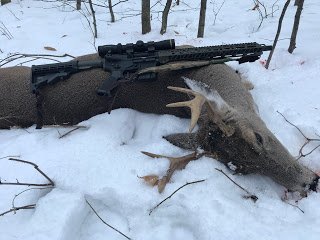 A small 10-point fell to the “modern 30-30”
Earlier this year I started a little personal project aimed to proof the worse of the so called Modern Sporting Rifle, which is generally an incarnation in one disguise or another of the AR-15 platform, as a legitimate deer hunting rifle. I won’t repeat all the points discussed in the previous blog, but I would like to report on the completed experiment.
After a mostly unfruitful archery season, that is if you measure success exclusively by the weight of your game bag, Opening Day happened upon us. For the glorious Fifteenth I took my Winchester 71 in 348 Winchester to my blind, but must confess that I struggled with taking a “longer” shot using the aperture sights which, although precise, provide no magnification or light gathering capability. Being of middle age clarity of the target is achieved through optics, not effort or good intentions.
So, on the sixteenth I listened to the voice of reason and brought my WW-15 (an AR-15 with different letters) in 7,62×39 and topped with an excellent Leupold VX-R with a 30mm tube which helps with light gathering, especially for early and late hours when deer are most active.
I can tell you that this was an enlightening experience. The short overall length, even with the stock fully extended, makes it very handy in the confines of a blind. The detachable magazine and positive bolt hold open makes it convenient to load, and especially unload, the rifle making it safe and secure while climbing ladders, entering or exiting blinds or vehicles, etc., and to handle it in the blind and pointing the barrel out of the windows with minimal muzzle movement.
Well, I passed several does, fawns and illegal spikes and fork horns during the sixteenth, and after working at the gun shop on Saturday morning I went back to my vigil in the early afternoon. After reading a couple more chapters from Robert Ruark’s “The Old Man and the Boy” I heard munching on the bait pile, still legal until January 1st, 2019. A little button buck was delighting himself with carrots and I delighted myself in watching him through my binoculars for almost half an hour. The wind was on my face and he never suspected anything. I can only hope that he will get smarter and eventually become a trophy buck.
Around 4:00 PM a shape came out of the woods and into the logging road straight ahead of my blind. I saw it had antlers, but small. Would him be a legal buck? Around my neck of the woods there is the occasional trophy buck, but I measure my trophies by their epicurean qualities, and a young deer is juicy and tender. I used my binoculars to assess the antlers and counted at least five to a side, a lot of points for a very compact rack.
As the young buck came straight at me I exchanged the binoculars for the little rifle, rested it on the blind window and for the first time in the season set my cross hairs on a deer. At about 50 yards, the buck started to consider his options, veered to the left and then to the right and presented a clear broadside shot. And when I touched the trigger I heard the worst sound in the world: CLICK!

Now, I had put several boxes of ammo through the little AR without a single hick-up, and now, at the moment of truth I have just a CLICK!

As the deer went into the trees, as to circle the bait pile, I worked the bolt, ejected the round in the chamber and fed another one. I positioned the crosshair in the place the deer was likely to emerge from the bush, and an eternity of seconds later, there he was, broadside again. I can’t remember if he was heading east or west, put little 125 grain bullet hit the mark just behind the shoulder, and the soon to be venison took of running in the direction he came from. As he passed the logging road at a dead run I connected again, with a second shot and just as I lost sight of him I heard him crash.

I unloaded the rifle, first the magazine was out and then the chamber was emptied, locked the bolt open, pocketed only the items I needed to tag the buck, shouldered the rifle and climbed down from my blind. Reloading was done in a second: magazine in, bolt released, safety engaged. Then I walked the logging road until I cut fresh tracks and found the blood spoor. Tracking blood in fresh snow is easy and in no time I came upon the deer.

I took some pictures, tagged it and went back to my blind to wait for dark when my friend Del that was hunting at another part of the property to come and help me. Why drag a deer alone and risk injury and physical exertion when it is so much easier to do that with help?

The final question is: could I have not just used a lever action 30-30 instead of the AR? The simple answer is yes, but the more complex one is that overall the AR is a more convenient rifle. It is safer by being easier to load and unload, having a bolt open device and positive safety, it is generally easier to scope than most lever action rifles, definitely it has a better trigger (which for me is very important) and great ergonomics (including a stock that allows for different lengths of pull, which is important for smaller framed hunters or shooters), and the semiautomatic action allows for a precise quick follow-up shot. Also, the 7,62×39 ammo proved to be more than adequate for deer in the relative close ranges of the north woods.

My conclusion from this not too scientific experiment (a single date point does not constitute a proper experiment) is that there is definitively a place for the Modern Sporting Rifle in hunting. This doesn’t mean that you will not see me going back to more classical firearms like a little double 7x57R stalking rifle that I am eyeing, but it just shows that even a conservative hunter like me must accept that firearms design continues to evolve.

A Wild Beast at Heart