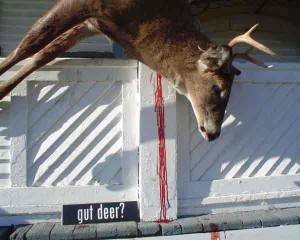 I remember reading several years ago about a Connecticut man who was arrested after local residents saw him use a hunting knife to gut a deer. The man, who said wanted to show his sons how it was done, conducted the procedure in the back lot of an apartment building.

He told officers he found the carcass on the side of a state road and brought it to the parking lot, where he proceeded to show his sons field-dressing technique. But witnesses called the behavior “shocking.” When the arresting officer arrived at the scene, he reported that he was “overcome by a very strong smell emanating from the carcass,” and charged the man with disorderly conduct.

Okay, the guy probably violated a transport law about picking a dead deer off the road, and you can question his smarts to gut the animal in the public parking lot. But give me a break—disorderly conduct? In this Snowflake world, he was getting his kids off their phones for a minute and teaching his kids some real-world stuff. Ridiculous!

It reminds me how this world has changed.

It also reminds me of the time about 20 years ago when I took a young buck to my local butcher shop here in Virginia one Saturday morning. The place has long gone out of business, and there’s a Subway there now (yes, times have changed, but I love a 6-inch turkey breast on wheat).

I wanted the butcher man to cut up my buck, but he said he only took skinned animals. I had gutted the deer earlier in the woods, but left the hide on. “Just go out back and rip the skin off and we’ll get ‘er done,” he said.

I didn’t think twice about it. Dropped the tailgate, pulled out my knife and started cutting and pulling hide. Pretty soon a small crowd formed around, men, moms and kids, and I was holding an impromptu deer-skinning seminar. I got lots of questions and shared some laughs. Nobody looked at me like I was some redneck savage. And nobody called the cops.

My Lord, what if I tried that today? Viral on social media? Locked up?