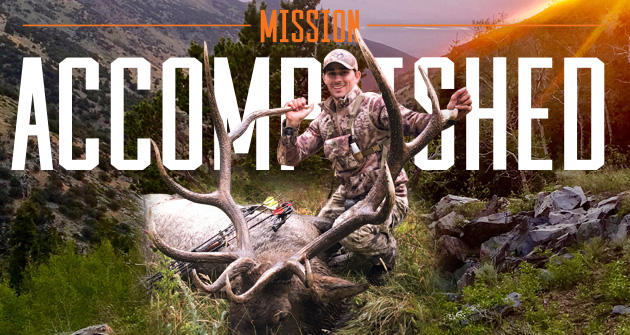 The weather broke from thunderstorms for a small time in the afternoon, and we made our move. We made our way into the wilderness as far away from people as possible. A combination of still–hunting and spot–and–stalk was our plan of attack now, and we planned on not going back to base camp without an elk on our backs.

After about an hour and a half of hiking, we heard a bugle. We made a beeline toward the bugle and tried some cow calls to hopefully locate him before he got us and be able to put together a stalk. As we came closer to the main bugle, there were three or four other bulls in the same area beginning to bugle back and forth. We finally got to the point where the bugles were close enough to set up a small hideout and see if a call would bring them in. I hunkered under an old pinion pine tree with my dad set up about 20 yards uphill from me. As I was settling in, I noticed about 60 yards in front of me was a huge wallow. This was the perfect place to set up and just wait patiently for them to come to water.

Time seemed to fly by as I listened to all the bugles going back and forth between the bulls, but with all the excitement came anxiousness as the thunder clouds began to roll back in. I got to watch a couple of herd bulls chase off satellite bulls and listen to bulls scream so close, the hair on my arms would rise. When the thunder from the storm would boom, it would echo in almost perfect harmony with the calling bulls; it was a soundtrack that was unbelievable.

Finally, a bull came out and made his way toward the wallow. I signaled to my dad that he was coming out and to let me know if he was a good one or not, and I was going to get into position to shoot. He let me know that it was a small 5×5. As the bull made his way to the wallow, I pulled out my phone and decided I wanted to get some film on him. Eight seconds into filming him, I heard a massive scream and saw a killer bull come running into the wallow full steam and chase the little bull out. Without a moment of hesitation or thought, I ranged the bull and drew my bow back.

My arrow released, and I watched my fletch disappear right behind his shoulder. Time stood still, my heart stopped; the world was quiet and seemed to be frozen in that split second of release to impact.

He walked out about 15 yards from the wallow, and I nocked another arrow, ready to let it fly at any moment. I watched while holding my breath for what seemed like forever for that bull to make his next move; he slowly laid down and rested his head in the grass. That was the moment it all came together—the hours of shooting, studying, training, ups and downs, highs and lows all culminated into that one moment. Mission accomplished!

ABOUT THE AUTHOR: My name is Brian Panelli, and I am 28 years old. I was born and raised in Reno, NV. I have been a bowhunter since I was 12 years old. I am a personal trainer, and I have hunted all over Nevada for deer and elk, always with a bow.