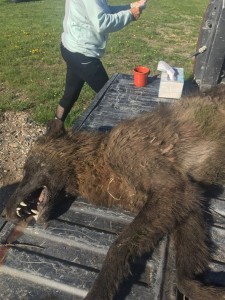 From the Great Falls Tribune: Was it a wolf, some type of hybrid, or a creature that hasn’t been seen in Montana since the Ice Age?

On May 16 a lone wolf-like animal was shot and killed on a ranch outside Denton. With long grayish fur, a large head and an extended snout, the animal shared many of the same characteristics as a wolf; but its ears were too large, its legs and body too short, its fur uncharacteristic of that common to a wolf.

The locals are buzzing about the possibilities. Some think it’s a wolf with weird genetics…others say grizzly cub…or a Dire Wolf, an extinct prehistoric carnivore that some people swear still lives…or even a Dogman, a relative to Sasquatch, a large cryptozoological creature that looks and walks like an upright canid.

The strange creature’s carcass was sent to the U.S. Fish & Wildlife Services forensics lab in Oregon. “We have no idea what this was until we get a DNA report back,” said a spokesman for Montana Fish, Wildlife and Parks.

It could take weeks or months to find out.