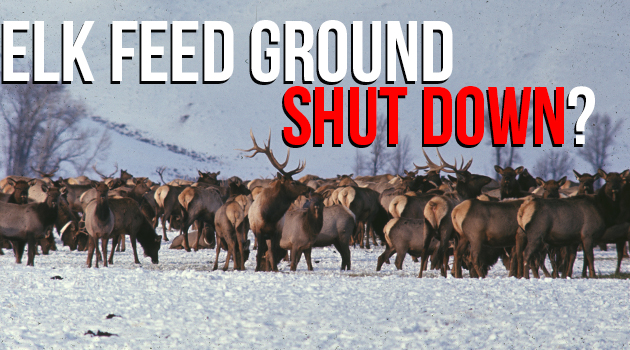 As I’m writing this it’s the day before Halloween and the temperature outside is hitting a high that is 23 degrees below the Fahrenheit freezing point. This is October, not January and winter’s early chokehold on Wyoming doesn’t set a welcome stage for our wildlife. With antelope and elk seeking recovery from their rut, deep snow and extreme temps are the last thing those worn down bucks and bulls need to contend with. Hopefully old man winter loosens his grip a tad but this is the West and extreme weather is just part of the deal.

What’s also been part of the deal, for elk especially, are the winter feeding programs such as the one operated by the National Elk Refuge in Jackson, WY. However, this program is in danger and along with it the health of the elk herds in the northern Rocky Mountains. A plan to “wean” elk off of the feeding program at the refuge and eventually discontinue it altogether is in place.

Pressure for this misguided and dangerous action plan is being placed on the federal government by environmental activist groups who are using CWD as a fear mongering tactic to eliminate the program. The groups claim that in order to avoid a possible population crash due to disease the program must be eliminated.

So let me get this straight… in order to maybe avoid the hypothetical demise of one of the world’s greatest elk herds we will guarantee their elimination by starving them to death? There has been zero evidence that CWD infected mule deer in the region have transmitted the disease “across species” and into elk. Yet, these environmentalists, the same ones who clamoured for wolf reintroduction, want us to believe that a danger exists and we must mitigate an imagined elk population crash by disease through a guaranteed population crash brought on by starvation through the ending of the very successful National Elk Refuge Feeding Program.

Wow! I don’t understand what these folks have against elk but make no mistake there is a war on elk in the West and if we as stewards of the resource are not vigilant, there will be no elk left on our landscape for our children’s children to enjoy, let alone hunt.

Today is the final day for public comment and we here at Eastmans’ just found out about this today. It’s not too late! Making calls and sending emails to the National Elk Refuge voicing your unconditional disapproval of the termination of the feeding program will no doubt still have an impact. Please contact the Acting Refuge Manager by phone (307)201-5436 or email nationalelkrefuge@fws.gov to put a stop to the eradication plan for this elk herd.

The grandfather of Guy and Ike Eastman used to tell of a time before the Elk Refuge feeding program when by the end of winter a man could walk for 25 miles around Jackson and never run out of elk carcasses piled up due to starvation. “Those who fail to learn from history are doomed to repeat it.”