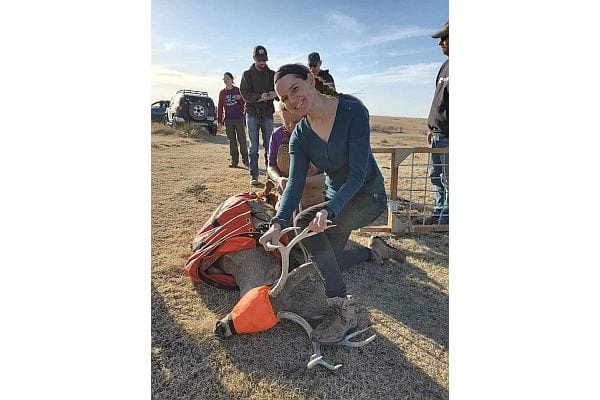 Pheasants Forever is excited to announce the hiring of Maureen Kinlan as the organization’s new Washington State big game project manager. The position will work to implement conservation and restoration efforts in high-priority Mule Deer Management Zones along the eastern slope of the Cascade Mountains and across the Columbia Plateau.

The position is funded through the National Fish and Wildlife Foundation in support of Secretarial Order 3362, “Improving Habitat Quality in Western Big Game Winter Range and Migration Corridors,” and will work with the Washington Department of Fish and Wildlife (WDWF) and a diverse collection of nonprofit and governmental partners to implement critical conservation projects in support of Washington State’s Mule Deer Management Plan. These efforts will not only improve mule deer habitat that but also critical habitat for sage grouse, quail, and many other sagebrush dependent species.

The main objective of the position is to promote robust and sustainable populations of mule deer in key winter ranges such as stopover areas and migration corridors. In addition, Kinlan will act as coordinator for the Arid Lands Initiative (ALI) in which she will work with partners to align the priorities of ALI with WDFW objectives to establish landscape connectivity and strategic decision making based on current spatial data being collected on WDFW collared deer herds.

“We are so excited to have Maureen on board in this brand-new position. This position represents a growing relationship with partners in Washington State and has huge opportunities to increase our impact for habitat at a landscape scale,” shared Michael Brown, Pheasants Forever’s sage grouse initiative coordinator.

Kinlan grew up with a passion for wildlife research and large mammal conservation and management. She received her B.S. in Environmental Science, with a minor in biology and concentrated her coursework in wildlife from King’s College, Pennsylvania. After her undergraduate degree, she worked for five years as a wildlife technician on various research projects including the predator/prey project with the South Florida Deer Study and the PA Deer Forest Study where she was hired as the wildlife biologist aide/ northern crew leader. The beginning of her career was followed by graduate coursework for her master’s degree at Kansas State University where she assisted with a deer ecology project focusing on sympatric populations of mule and white-tailed deer.