Do You Know Your Birds? 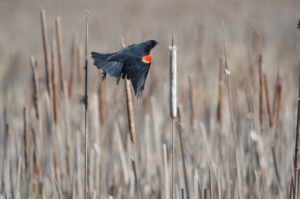 Red-winged blackbirds are one of the most abundant birds in North America.

Males are easily identified with their glossy back body and shoulder patches that are red trimmed in yellow. Females are much blander, with a brown back and heavily-streaked breast. They can be found in almost any cattail marsh or wet area in the Badger State during the summer months.

During breeding season, the males may have up to 15 mates and defend their territory fiercely. The females lay two to four light-blue eggs in a nest that she primarily builds and will have one to two broods per summer. The eggs will hatch in about two weeks and the young will fledge about two weeks after hatching.

Red-winged blackbirds tend to eat mainly insects when available but will eat seeds such as corn and wheat. If you are trying to attract them to your feeder, remember to put some seed on the ground as that is their preferred method of feeding.