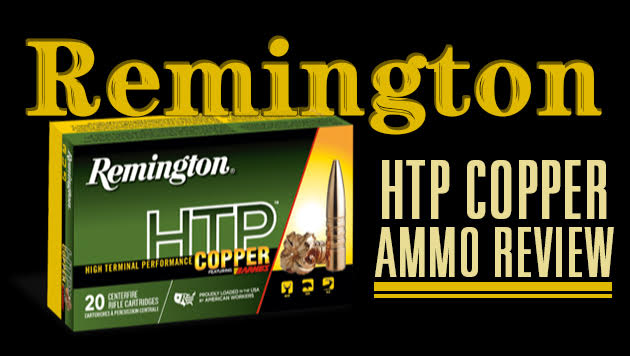 Stalking down a high-country game trail I caught movement to my right that quickly turned into the chocolate brown legs of a bull elk. He kept coming, closing the distance and when he stepped out at around 15 yards he locked on to me standing in the same opening he had just stridden into. Good thing for me I had seen him first and was ready.

The 30-06 roared and the bull crumpled as the 168 gr. Barnes TSX smacked him through the facing shoulder at about 2700 fps. Chalk up more meat in the pot and antlers on the wall for the Remington HTP Copper line of ammunition.

Remington’s HTP Copper ammunition features Barnes TSX bullets, long known for their sturdy construction, deep penetration and enormous energy transfer on game. The HTP stands for High Terminal Performance and in the hunt above that’s exactly what I experienced. The Barnes slug smashed the bull’s facing shoulder, destroyed his lungs, severed the vessels above his heart, punched a hole in his diaphragm, ruptured his liver and exited just behind his last rib leaving a spray of blood and hair on the aspen tree behind him.

When hunting elk your shots can range from right up close to way over yonder and you need a bullet that can handle either situation as this isn’t just the case in elk hunting but big game hunting in general. For “up close” shots a bullet needs to be able to expand violently to transfer maximum energy for quick, clean kills but it also needs to penetrate deeply to destroy as many vital organs and break as much bone as possible. An awful lot of bullets do this well at longer distances but fail miserably at spitting distance, leaving animals savagely wounded but alive and prone to escape. Other bullets smash through bone and tissue at close range very effectively but “pin-hole” at longer ranges, failing to impart sufficient energy to an animal to afford an ethical harvest. This has NOT been my experience with the Barnes TSX featured in the Remington HTP Copper line of ammunition. The Barnes TSX has provided me with DRT kills on everything from pronghorns and whitetails to elk at ranges from inside 20 yards to over 500.

The HTP Copper lineup for the .223 Rem., .270 Win., 7mm Rem Mag., .300 AAC Blackout, .30-30 Win., .30-06 Springfield, and the .308 Win., delivers performance across a broad spectrum of ranges and being offered in seven popular chamberings is sure to bring you a devastating round in your preferred cartridge. Whether you’re hunting pronghorns, deer or elk, the Remington HTP Copper line of ammunition will leave you with an animal on the ground and a smile on your face.

So, we began this review with an in your face elk harvest, to illustrate the punishing efficacy of the HTP Copper loads in the 168 gr. 30-06 load. It’s only fair then that we highlight the ammunition’s long-range capabilities. The rifle this time was a .270 Win. and the load was the 130 gr. HTP Copper.

It had been a long season looking for “the right buck” and I was perched on a favorite vantage point when a nice whitetail trotted out of a draw following a doe. I knew he was “out there” but looked to be within my maximum effective range. The rangefinder gave me a reading of 503 yards. I took my time getting a solid rest and making sure I had everything perfect. The trigger broke and the Barnes TSX zipped across the expanse of Wyoming real estate hitting the buck a tad lower than what I was aiming for but still in the breadbasket. He buckled and went down, never to regain his feet and the Remington HTP Copper had proven its worth once again.

If you’re looking for a load that will perform across a variety of ranges and effectively handle any animal you’re chosen caliber is prudent for then you should be considering Remington’s HTP Copper featuring Barnes TSX bullets. To learn more about this great line of factory ammunition visit:  https://www.remington.com/ammunition/centerfire-rifle/htp-copper-high-terminal-performance .