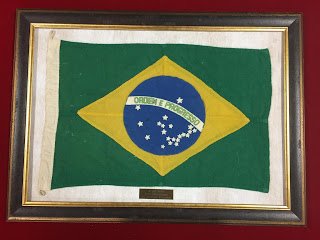 The WWII Brazilian Flag
Early this January, around the time that I started operating my new business, Hampel’s Gun Co. in Traverse City, Michigan, Pete Zimmerman, a long time Hampel’s customer and family friend, came to store to meet me. And at that first meeting he presented me with a most unique and dear gift: the Brazilian Flag that you see in the photo above.
Pete, owner and operator of Rediscovered Shooting Treasures, that provides faithful “Reproductions of Classic Original Factory Firearm Manuals, Instructions, Boxes and Hang Tags”, explained to me that both his parents were in active service during World War II, his father being a bomber pilot and his mother a nurse, and that they were based in Natal, northeastern Brazil.
Once his father was done with bombing missions he started flying casualties between North Africa and northeastern Brazil. Just to refresh your geography, the straight line between Natal – Brazil and Dakar – Senegal, is the shortest distance across the Atlantic, and during World War II this airway was called “The Bridge to Victory.”
Anyhow, sometime during their war services, bomber pilot Zimmerman and soon-to-be nurse Zimmerman. met and fell in love and were married in Brazil, when they received this flag as a gift.
And so, the Brazilian flag was kept in the Zimmerman family for over seventy year, until it was gifted to me!
I must say that receiving it was a very emotional moment to me, and immediately I knew that I had not only the obligation to continue to preserve it, but also that it would be an opportunity to display a symbol of love and friendship.

A Wild Beast at Heart