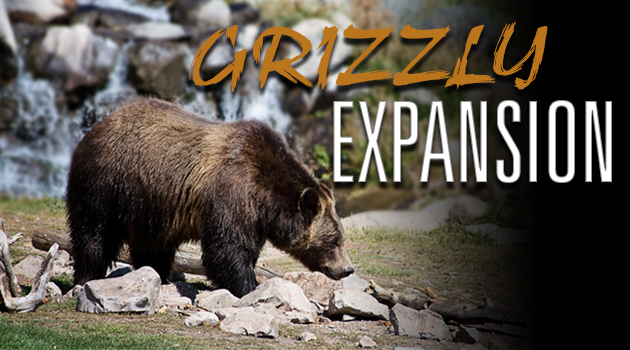 A recent Powell Tribune article attempts to examine the reason that grizzlies in the Greater Yellowstone Ecosystem are ranging further afield from their “core area” or DMA (demographic monitoring area). Last year a sow and cubs was discovered just east of Powell, Wyoming in a farmer’s field, that’s a long way (100+ miles as the crow flies) from Old Faithful but why? Are these bears seeking asylum from an overpopulated GYE or, and this is where the article examines a little different topic, are these refugee grizzlies out of food and expanding their range to fill bellies?

The answer to this question may lie in the counting method employed by the Wyoming Game and Fish. The Chao 2 method is a notoriously conservative scientific method for establishing game populations and due to its conservative nature, the method garners scrutiny from folks who claim there are a lot more than 700 grizzlies in the GYE, especially within the DMA. Therefore, this conservative population estimate of 700 bruins seems to be knocked askew when compared with the rising number of both grizzly bear fatalities and grizzly bear/human/livestock/automobile incidents.

Ask anyone who spends a lot of time tramping around in the GYE and they can attest that the 700 bear population estimate seems a tad off. Therefore a push for the implementation of “best science” methods to gain a more accurate picture of the grizzly bear population in and around the DMA is gaining steam and will ultimately be decided upon by the Interagency Grizzly Bear Committee.

However, the question remains… why are the bears leaving seemingly suitable habitat and venturing into zones heavily occupied by humans? Are there simply too many bears in the GYE and therefore too much competition for suffering food stuffs? Are sows with cubs seeking safe spaces away from aggressive boars? Are the bears simply doing what bears do and in a take on the old children’s song, “going over the mountain to see what they can see!”?

I’m not a biologist but I don’t think this question takes a PhD to cipher either. Bears are no different than any other animal in that when a habitat reaches its maximum carrying capacity competition for food becomes fierce and displacement is bound to happen. I do think we need a better (read more accurate) understanding of just how many grizzlies are roaming the GYE so we can scientifically prove that the population is recovered, delisting can happen and sound plans for state level management via hunting, such as the one Wyoming already has in place, can be implemented. We need to manage these bears via the North American model of wildlife conservation not the California/British Columbia model of feelings based, ballot driven gerrymandering in which the real losers are the bears. If a more accurate counting method can make that happen then I say do it!