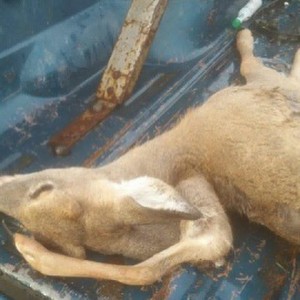 Okay, something freaky for Halloween.

Saw on Twitter where somebody shot this deer the other day and said, “This is a first for me, an extra leg growing out his neck!”

Scientists say the extra leg is likely that of a twin that didn’t form all the way.

According to QDMA this is most likely a case of a “parasitic twin.” Twin fawns probably began to develop inside a doe, but the twin embryos did not completely separate and one of them stopped developing normally. The leg on this buck’s back neck may actually be a non-functioning remnant of the twin that failed to develop fully, but that remained attached to the healthy embryo.

Parasitic twins are rare but have been documented in many animal species and even in humans.